In my current Bible reading, I’m in Job. In fact, I’m in the middle of Job’s laments that he did nothing to deserve the troubles he’s suffered.

A young mom at our church passed away last weekend. 33 years old. She’d fought leukemia three times over the last twelve years. She married, had two children, taught in a public school classroom and in the church’s Sunday School rooms. My grand-daughters have been in her class when they visit. Her parents have been good friends for nearly fifteen years now. She was responding to the treatment for the third leukemia recurrence, but then she got pneumonia and she was gone.

I talked with a mutual friend after hearing the news of Mackenzie’s death. My friend confessed to being angry with God. Mackenzie fought so hard and so long and she had a loving family. How could God take her? A few of the more honest souls at church the next day echoed that thought to me. And I have to agree.

We’re angry. And not just angry, but angry at God.

At first it seems a bit like tilting at windmills. Futile. In vain. Useless. 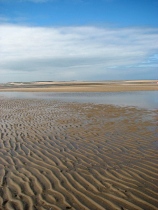 But with every word of recrimination I’ve uttered to God, a little bit of the anger has receded. It’s definitely not gone, but it’s perhaps lessened a minuscule bit.

I have no idea why God would take Mackenzie when he did. Or why He takes anyone before they’ve lived a good long life, read all the books they wanted to, kissed their loved ones, fell asleep and woke in Glory.

In this instant though, I have to confess, I’m not quite there. I trust that I will be. Eventually.

I know that God knows my anger and it’s safe with Him. I can tell Him how I feel about this. As Anne Lamott says, I

can file a brief with the Complaint Department (and believe me, I have and will again!). But in the end I have to trust that He knows what He’s doing. And it has to be enough.

In my humanity right now, I don’t know how her children being without a mother is a good idea. How her husband and family getting up every day without her is a better idea than living many more years with her. Like Job, I can demand answers but also like Job, I may have to be satisfied with a cosmic, “Because I AM said so.”

In the end, it will be enough.