I’m pretty good with most social media. I tweet occasionally. I check Facebook most days. I’m on email several times a day to keep on top of it. I can Instagram and Pinterest although I don’t spend hours on either. LinkedIn. Tumblr. 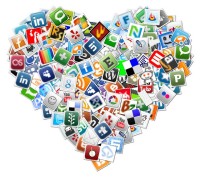 Some days it seems that my social media is running me, instead of the other way around.

There are blogs to keep up with, friends and family to connect with, and other writers to wave at along our shared journey.

It seems as if the whole point of social media–being social–is forgotten. When someone would rather check in with their friends on Facebook instead of chatting with their friends who care enough to show up at their real life events, something is wrong.

I heard someone ask a question the other day about what Twitter could do for him/her in terms of marketing. The conversation zoomed by too fast for me to jump in but the thing to remember is that Twitter and all the social media platforms are not about what they can do for you, it’s about connecting. There’s a real person on the other end of that wifi, sitting at their keyboard, typing away.

When you move away from the What’s In It For Me (WIIFM or Whiffum) mentality, connecting is not as much about work as it is about making friends.