Today, I’m talking about the third in Susan Mallery’s Fool’s Gold 2014 releases, Until We Touch. 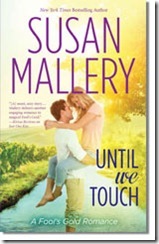 This is Jack and Larissa’s story and it’s wonderful!

Jack McGarry is one of the newcomers to Fool’s Gold. His PR firm, SCORE, moved to town a few months ago and he’s enjoyed being part of the community and watching his business partners and friends settle in.

The previous books have hinted at Larissa’s connection to the emotionally unavailable Jack and I looked forward to seeing how Mallery would work that out.

Larissa loves a rescue and a cause. She’s often called to help find homes for wayward animals and she directs Jack’s charitable causes, especially transplant patients.

Jack suffered a loss years ago and he’s compensated by not allowing anyone to get too close. So how did Larissa get to him and why didn’t he notice until it was too late?

I found Until We Touch particularly satisfying emotionally. I’ve said before that I didn’t care for Mallery’s heroes penchant for running away before they have their epiphany. Jack definitely retreated, but in a way that made sense to me. Then his epiphany and turn around worked. Also, there was less sex in this one, a plus for me, and the first sex scene didn’t happen until at least two/thirds of the way in, and I have to say I liked it. Not just because these books push my steaminess boundary, but I think the increased tension added to the richness of the story.

The town of Fool’s Gold is not quite as much a character as in past books, but we still get a definite taste for the feeling of community. Mayor Marsha is up to her usual tricks. Several new characters are introduced who will likely be the focus of next summer’s books and I can’t wait. I’m especially looking forward to Bailey and Kenny’s story. I can’t wait to see how Kenny will fold and surrender to the inevitability of love in Fool’s Gold, California.

My recommendation: Two thumbs up!

I received a free copy of Until We Met, in return for a honest review.