For a few of my favorite authors, I’m a total fan girl.

Nora Roberts is one of them. I got the opportunity to meet her last month in San Antonio at the Romance Writers of America (R) annual conference.

I’ve read several of her stand alone romances and enjoyed them but I love her J.D. Robb … In Death  series.

She signed Thankless in Death for me and I just finished it.

This series just gets better and better. I teared up at the end.

This book is seriously good.

It’s approaching Thanksgiving in New York City in 2060. Lt. Eve Dallas is kinda-sorta looking forward to the holiday. Roarke’s Irish family is about to descend on them.

Of course, Eve gets a murder case.

A couple murdered in their home. The prime suspect is their son, a perpetually petulant and selfish man who blames his life (or lack of one) on everyone else. It’s never his fault that he gets fired, even though he’s late to work most days. 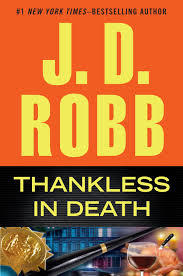 The son sets out to avenge all his perceived slights on the friends and family he holds responsible.

Eve and the team work tirelessly to find him and catch him before he kills again.

What I love about this series is not just the characters and the stories, but the humanity Robb brings.

Eve is not a perfect character. She’s wounded but she’s finding healing in her husband and new family and friends and her work. She takes her work very personally and it makes her good at her job.

The victims matter to Eve. I got a bit teary at the close of this book when Eve had to fight down her own emotions. She’s getting better at acknowledging her feelings and facing them.

If you’re a fictional character in 2060 NYC, Lt. Eve Dallas is the cop you want working your case.

Besides Eve Dallas, I really like Magnum P.I. Because really, Tom Selleck?