Only Jane Austen could argue with that.

Heyer died in 1974 but her books continue to be published, read, and loved.

Many contemporary romance writers point to Heyer when asked who was their first romance novelist.

I was given a couple of her books by a friend who recently discovered her. I enjoyed them! 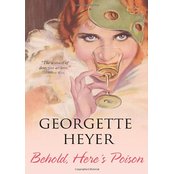 They are definitely indicative of the era they were written in. Readers then were far more patient with description and details than contemporary readers are. But the stories are still good and stand the test of time.

Behold, Here’s Poison is the story of the murder of a disagreeable man. No one is really sorry he’s dead but there’s no reason to suspect foul play. Until his sister, the equally disagreeable Mrs. Lupton, insists on an autopsy and it’s discovered Mr. Matthews was indeed poisoned.

Suspicion swings between household members. His spinster sister who kept house for him, and insisted she didn’t really mind. His widowed sister-in-law who so appreciated his care for her and her children. His nephew was being threatened with being shipped off to South America. The niece he forbade to marry her fiance, the doctor next door. The doctor himself. His other nephew, the heir. There is no shortage of suspects.

The clues are sprinkled fairly, there are plenty of red herrings, enough to keep the story interesting and the reader guessing, but not so many that the solution is unfair.

If you’re tired of contemporary romances or mysteries with their sex and/or violence, and are looking for something different, something “old school,” give Georgette Heyer a try. You just may like her!