Even though I was sad to say good-bye to Fool’s Gold, I took comfort that Susan Mallery was still writing. And she was branching out from romance only to some compelling women’s fiction. 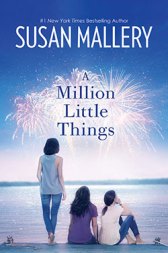 Mallery’s Mischief Bay series is definitely less romance, more women’s fiction. Mischief Bay has many things in common with Fool’s Gold. The warmth and humor for starters. But there are some major differences too.

Mischief Bay has heart and sunshine, but no over-the-top characters like Eddie and Gladys from Fool’s Gold. There are still businesses with fun names, but no all-knowing Mayor Marsha.

A MILLION LITTLE THINGS has characters both new and familiar. We met Pam in THE GIRLS OF MISCHIEF BAY. She’s now been widowed for two years. Her daughter Jen is dealing with her eighteen-month-old son who won’t talk and she can’t get anyone to believe her that something is wrong. Jen and her best friend Zoe have been drifting apart since Jen’s been so wrapped up in Jack. Zoe’s recently single and alone. So alone that when she was accidentally locked in her attic, she was afraid she’d die up there and no one would find her body for weeks.

Zoe decides to make some changes in her life and, after a gentle nudge from Pam, begins dating Pam’s son and Jen’s brother, Brian. Jen’s anxiety worsens, not just about Jack’s speech. Her husband is a cop and she worries about him too. Pam is happy, but also intrigued and flattered when Zoe’s father expresses interest in her. She agrees to dinner, but tells him she doesn’t date. Which surprises him, since they are on a date.

I enjoyed this a lot. The characters are people I feel like I either know already or I would enjoy getting to know them. If you like small town women’s fiction with humor and romance, (and really–who doesn’t??) then I know you’ll love Mischief Bay and A MILLION LITTLE THINGS.

Each book in the Mischief Bay series can stand alone. Some characters have encores, but nothing in the new stories will spoil it if you go back and read an earlier book.

I love this series and highly recommend it and this book.

I received a free copy of this book from the author in exchange for an honest review. Done!