On our first morning in London, it was a beautiful September day, a bit cool and clear and perfect walking weather.

We met up with Will, our guide from Strawberry Tours, at a Tube station. There were about twelve or so of us. There were two tours that morning, one in Spanish and Will’s in English.

Our first site was part of the crumbling Wall of London which stands near the tour’s beginning point. We learned about the original city, Londinium, its fall to William the Conqueror, and about the City of London, which is the historic and business square mile inside what we usually think of as London.

The City of London has been governed by the Lord Mayor of the City of London since William the Conqueror gave governance of the city back to its inhabitants in 1066. And we learned that when the Queen wishes to enter

the City, she must request permission from the Lord Mayor, bow to him, and touch his sword, then she may enter the city behind him. The Lord Mayor of the City and his sword are the only things she bows too. Fascinating stuff!

We then moved to the Tower of London. We didn’t enter the Tower, but Will shared its history and stories about some of it’s occupants. We also visited the Royal Courts of Justice, the Bank of England, St. Paul’s Cathedral (I wish we could have returned here, it looked fabulous!), Temple Church, and several others. We learned about the Great Fire of London in 1666, the Knights Templar, the financial and business district, Leadenhall Market (which could have been the inspiration for Diagon Alley), and Fleet Street.

We chatted and walked with a young man from Irvine, California named Tran. He’s been traveling the world for the last nineteen months. Well, it was nineteen months at that time, in September, so it would be closer to twenty-five months now. He does go home 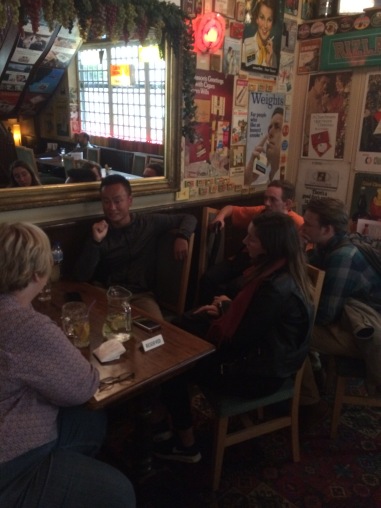 for holidays and his mom’s birthday. We mentioned that we were on the trip celebrating our 40th wedding anniversary. Tran then asked us lots of questions about love and relationships and how to make them work. It turned out to be a fascinating conversation. We ended at the Edgar Wallace pub for bangers and mash or fish and chips. We sat with Tran and a woman from Canada. She left as soon as we were done eating, as she had a reservation on the Harry Potter walking tour at three o’clock. We talked for a long time with Tran and several of his new friends from the hostel they stayed at. A young man from Pennsylvania, one from Australia, and a woman from Chile.

We headed back to the hotel for a rest since we’d done a good bit of walking. Then we headed out again. This time we headed to Her Majesty’s Theatre for our evening show: The Phantom of the Opera. We’d never seen it live, so that was a definite highlight! The theatre was a bit more comfortable than the one the evening before. The show was spectacular. The chandelier is as awe-inspiring as I’d heard. The voices and music were incredible. Amazing show!

After we got back to our Hyde Street tube station, we stopped at a neighborhood pub for a nightcap and to toast another day.

On the docket next: An unexpected meeting at our hotel and Oxford!

One thought on “Thursdays in London With the Padgetts”