It’s been over a month since I posted, but what a month it’s been! Pasadena, Vancouver BC, Alaska, Maine …

As I write, we’re in a suburb of Chicago. It will likely take me a few days to catch up to the present (and to get back in the habit of writing every day or every other day).

We got home from Colorado at the end of August and spent a few days catching up on things around the house as well as laundry. Then we drove south to Pasadena to visit our friends and to attend the Fresno State vs. USC football game. It was a long-planned weekend, combining several favorite pastimes. 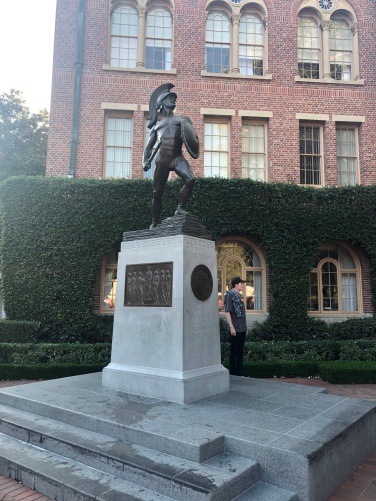 We left Altadena first thing Sunday, and drove to Amber and Martin’s home in Visalia and visited with them for a couple of hours. Grampy got to wrestle and play with Zach and I think they were both worn out by the time we left.

One of the reasons we got an early start was that we wanted to stop by a memorial open house for a long-time friend that was happening that afternoon. Jerry and Roni were good friends of ours when we were young marrieds. They were a little bit older than us, they already had kids, and they were really great role models to us for marriage and parenting. After Dave started on the Highway Patrol and we moved to Southern California, we drifted apart except for occasional Christmas cards. When we moved back to the Valley, we had dinner a couple of times, then Jerry and I connected again on Facebook, which is how I learned he had passed away and about the memorial open house his family was hosting. Even though we hadn’t spent any significant time with Jerry and Roni in over thirty years, (except for the two dinners), it was such a pleasure to hear others talk about Jerry and to know he was still the man we had known and loved all those years ago: kind, generous, irascible, unable to hold a grudge. His son and daughter and grandkids and wife shared stories. Jerry and Roni have invested themselves into the lives of teens and at-risk kids. They’ve sent kids to camp, helped them get enrolled in college, find housing, buy books. Jerry and Roni are the real deal. They didn’t sit around talk about what programs should be funded or how to fix society. They just went about helping the people God put in their path. It was such a blessing to be there. Jerry will be missed and we promised to get together with Roni when we’re back in town.

Monday (Labor Day) and Tuesday were busy with work and errands and appointments. Monday afternoon I finished my monthly reports for the day job and my computer wanted to install updates so I told it to go ahead while David and I had dinner. I came back a few hours later and the computer was frozen. I could see the welcome screen, sort of. But I couldn’t sign in. It wouldn’t respond to anything. I did a couple of forced reboots. I unplugged the power, let it sit, plugged it back in. Same thing. Argh. Put the thing in the car to take to the Geek Squad Tuesday. Which I did, amongst the other 40 errands I had to do. Along with packing.

Because, dark and early (4:45 am early!) Wednesday morning, we were leaving for Vancouver BC, and our long-awaited Alaska cruise! My kind and gracious brother- and sister-in-law picked up Dave and our friends Lee and Karie, while I drove to pick up my folks and we rendezvoused with both cars at the airport. My sister-in-law took my car to work, then dropped it off at our house later. So we had six people and about 12 bags, totes and backpacks to get through the airport. Everything went fine except I had neglected to remind my folks about TSA’s rule about liquids having to be less than 3.4 ounces in your carryons. They had to throw out toothpaste, hairspray, and shaving cream. But at least it was all things easily replaceable in Vancouver. So we made our 6:40 flight from Fresno to Seattle just fine. We had a long layover in Sea/Tac, where we had requested wheelchairs for my folks, not knowing how far we’d have to walk to our gates.

We had a serendipity in Seattle when we ran into a friend and former co-worker of Dave and Lee’s who was waiting for his connecting flight home to Idaho. That was crazy! From Seattle, we flew into Vancouver. It’s a beautiful airport, and it was our first experience with the mythic super-polite Canadian. We’re a little bewildered about that.

Our wheelchair pushers delivered the folks and their bags to a couple of motorized carts then disappeared. I understood them to say they had to go get two more passengers, but they weren’t clear in their communication. And we waited a looooong time. Just as everyone was confused and irritated, they arrived back. By the time they loaded up the people who needed assistance and their bags, there wasn’t room for the daughter of the third passenger on Mom and Dad’s cart. She walked alongside the cart. As David and I did. Actually, we walked ahead of it and were waiting at Customs. When the cart arrived, the other passenger and her daughter were talking quite loudly, Mom was giving me a LOOK, and the young female driver looked like she wanted to disappear.

I went to help Mom off the back of the cart and to get everyone’s passports. The third passenger mumbled to me an apology for her behavior. I had no idea what she was talking about, so I just shrugged. Well … come to find out, she and her daughter had gotten into a shouting match and had been yelling at the poor driver on the trip from the gate to Customs. As we were gathering ourselves and our passports, the driver went to a supervisor nearby and said she would help our party, but someone else needed to help the other two ladies from her cart. As she was talking us through the Customs kiosk, David asked if she was okay, and she teared up and started to cry. We all apologized for the others’ behavior and tried to help. We tipped her generously. When we observed the daughter talking to a supervisor, we also told a supervisor that nothing was this young woman’s fault. Mom told the daughter that their behavior was inappropriate. The daughter nodded and didn’t disagree. I really don’t know what got into them, except the mother/wheelchair passenger wanted her daughter to ride on the cart too, and there wasn’t room. It was a 4-passenger cart. Two Pittmans, her, and the driver and there was no more room. So that put a dark cloud over our arrival in Vancouver.

The walk from our gate to Customs was beautiful. They have displays about nature and the environment of British Columbia. The rest of Customs was easy and uneventful. Because of the delay, Lee and Karie had collected all our bags, so they were waiting for us.

We then schlepped everything out of the airport and across to the parking garage to the car rentals where Lee had reserved an SUV. It held all six of us and all 28 of our bags (they multiplied on the journey–I shared the far rear seat with some of them). On the walk, there are some really cool sculptures of rocks with handles attached, so they look like luggage, backpacks, briefcases.

We got to our hotel in downtown Vancouver and checked in, and found an Irish pub for dinner, where we had good food, Guinness, and watched one young man wait on all the tables.

It was an early night for us. We were all tired, emotionally and physically.

Tomorrow: Our three days in Vancouver.

2 thoughts on “Back to Work”