Since we’d had a couple of long days, and we had another 5 hour drive to Wilsonville, near Portland, we decided to take our time checking out from our hotel in Yreka. We had breakfast, watched our church service online, and then packed up.

The trip to Wilsonville was just the way we like it: uneventful. We found our hotel fine. When I make reservations, I always look at the parking lot via a satellite view to be sure there’s room to maneuver the trailer in and out. This particular hotel had a big enough parking lot, but they were undergoing renovations and a lot of the parking lot was taken up with storage containers and construction vehicles. Checking in took quite a while, too.

Once settled, we called up an Uber for a ride to dinner at the Oswego Grill. We shared the Cabernet Tenderloin Tips and they were fabulous!

My cousin, Lisa, had graciously invited us to stay her a few days while we were in town. I knew she and her husband had recently moved and when she invited us, I assumed they had moved and were settled. Well, they had moved all right. A week before we arrived! Lisa was amazing, hosting us while still getting settled and finding her belongings and unpacking. We ended up spending two nights with Lisa and Tom and had a great time.

Monday we relaxed at their beautiful new home, then went to a great winery for some 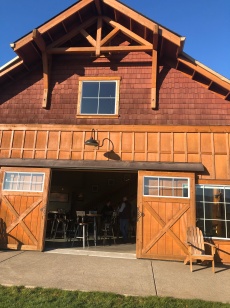 tasting. Domaine Divio‘s motto is Oregon wine by essence, Burgundian wine by style. They have some fabulous Pinot Noirs. Then we headed to a local restaurant for dinner. Rosmarino is authentic and delicious Italian fare. I had the All’Amatriciana pasta (tomato sauce enhanced with homemade pancetta, onions & rosemary). It was so good! I can see why it’s one of Lisa and Tom’s favorites.

After dinner, we went across the street to the coffee/gelato/bookstore where I found some books that I had to have. Since we were driving only on this section of the tour, I didn’t have to worry about space or weight in my suitcase.

A great day in Hillsboro! I worked while David and Tom and Lisa did things around the house and Lisa also had some work to take care of and an appointment. David and Tom made a great dinner for us.

We left Lisa and Tom and Oregon and headed north to Seattle. Well, Tacoma was our actual destination, about three and half hours away. We found a great gas station in Washington, next to a casino. But it has lots of room for us and we stopped there several times over the next two weeks as we moved between events in Oregon and Washington.

Both the hotel in Yreka and this hotel in Tacoma, we’d stayed at before when we drove home after our Alaska cruise. So we were familiar with the parking lots and the layouts. We checked in and this hotel has a restaurant, so we had dinner there.

We had a call time of 9:30 AM in downtown Seattle the next morning. Google Maps said to allow two hours and the front desk clerks agreed. So it was an early evening and then an early morning for us.

Our event today was in downtown Seattle at a park/plaza where there were food trucks gathered.

This was a very different sort of event for us. The park was full of homeless people and addicts. Yet as lunchtime approached and the food trucks opened for business, the place filled with business people. Many of them stopped to ask about the trailer, and even started a tour, but since they were on their lunch hour, they didn’t want to take time for the full tour.

After I explained the premise of the trailer to one woman, she expressed support for our overall aim, but said she didn’t think the park was an appropriate venue, since “we’re trying to make it a family-friendly place.” Well … a quick glance at the addicts standing around told me how well that was working out.

As the lines thinned down after lunch, I was able to get us lunch from one of the food trucks. The Fork and Fin Food Truck featured Alaskan Pollock. We shared a salad with the pollock and it was amazing! The fish was fresh and delicious and it had a spicy crema dressing that was zippy without being too hot.

We were supposed to be there until 4:00 but by 2:00, everyone was packed up and gone and the only people left in the park were the homeless and the addicts. So we also called it a day and loaded up the trailer. We’d had to unhook the truck and park it off site, so we hiked back to the parking lot.

Which brought out something interesting. For some reason, David completely lost his bearings in downtown Seattle. In the morning, we’d unhooked and driven to the lot, then walked the three blocks back to the park. I sometimes can’t tell you which direction is west or north, but I can usually retrace my route. As we left the lot to walk back to the plaza, we had an immediate disagreement about which direction to go, so I had open Google Maps to navigate. And when we returned to the lot to pick up the truck, we made it there just fine, but when we pulled out of the lot to drive to plaza, David thought I was sending him the wrong way. I had to insist he follow my instructions, and sure enough, we went right to the park. 🙂

Before we got to Seattle, we’d talked about what we’d like to do in town, if we had time. The two things we settled on were visiting Pike Place Market and the Chihuly Garden and Glass museum/display. As it turned out, we didn’t make it to either, but as I navigated us out of the city, we did drive right by Pike Place Market. So I got to see it, at least.

Since we were two hours from our Tacoma hotel, we knew it was going to be another long day. And it was. And as I said, we’d stayed at the Tacoma hotel before. Our room faced I-5 and there was quite a bit of traffic noise. We were coming back in a week, and when I made the next reservation, I added a note that we wanted a room away from the freeway, and that we wanted a quiet room above all else.

We got to Tacoma, had another dinner at the hotel and went to bed. Tomorrow, back to Oregon.

Our next event was tomorrow, Saturday, in Eugene, Oregon, about a four hour drive. So we took some time this morning to drive to Silverdale, Washington to visit some 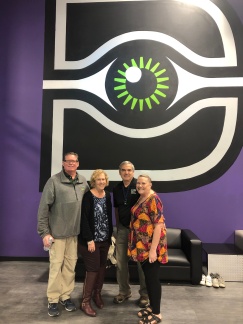 transplanted Fresno friends. They also opened a trampoline park, like the one we’d visited in North Carolina. It’s such a fun place and we had a great, though brief, time catching up.

We’d left the trailer at the Tacoma hotel, so after our visit, we drove back to Tacoma. I’d had some Amazon purchases sent to the hotel and one of them hadn’t shown up. I’d realized I’d put in the wrong address for the hotel, and unfortunately, the address I put in didn’t exist. But the closest numbers were across the street from us and down a block at a strip mall. So we made a quick stop and I canvassed those stores, popping in and asking if a package addressed to Carrie Padgett had been delivered. I visited a laundromat, a Goodwill store, a cannabis store, and a Hollywood Hustler.

The cannabis store was quite interesting. Inside was a doorman, checking IDs before letting customers enter. I never made it past him, because a) I wasn’t a customer, b) I didn’t have my ID, and c) I didn’t want to buy anything. But because I’m a writer and I believe everything might make an interesting addition to a story, I freely looked around, taking mental snapshots and sniffing. There’s a definite smell to the place. Not strictly like marijuana, but also not unpleasant. Distinctive. The customers were a cross-section. There was a biker in black leather. There was a student with a backpack. While I was waiting for the manager to look in the office for my package, two women came in. Both braless, one was toothless. But one struck a pose and declared, “Officially cancer-free! We’re going to celebrate now!”

The Hollywood Hustler store was also interesting. One section had a sign: 18 and over only. ID required to enter. Ummm … okay. (As noted above, I had no ID on me. David had dropped me off to check the stores and then gone to fill up the truck’s gas tank.) The clerk working the front counter was helping someone exchanging a product that … well, I’m not sure what it was. It was plastic, green, and shaped like a marijuana leaf.

We learned that marijuana is huge in Oregon. And they like it that way! That story will come up in the next post.

None of the stores had my package, so we returned to our hotel, hooked up the trailer and headed to Eugene. My satellite view of the hotel had shown a large vacant lot next to the hotel, with visible tire tracks. So we expected to be able to park there, if the lot itself was too small. We called the hotel on our way, to confirm they had room to accommodate the trailer. When we mentioned the vacant lot, the receptionist said, “There’s a creek in the middle, so no. And there’s construction next door.”

Well. The vacant lot we were referring to was now the construction site of a new hotel. It was a close fit, but we did get the trailer in. Our event the next day was the state cross country championships at a local community college in Eugene. There were several teams staying at our hotel and the parking lot was full of vans.

After checking in, we looked at restaurants, called an Uber and headed out. We’d settled on the Ram, a local chain. But as we talked with the Uber driver, we said we were looking for good barbecue and had considered another place, Bill and Ted’s BBQ. He said it was much better than where we were headed, so we changed our destination. Bill and Ted’s was great! We shared ribs and some sides. David had said he wanted dry ribs, not drowning in sauce. And he got his wish. They were tender and the meat fell off the bone.

After dinner, out next Uber driver took us back to the hotel. We had a good chat with him. His day job is with the local blood bank. Meeting so many people for short times, hearing a portion of their stories … it’s part of why we love this job.