We had all day to drive from Eugene to the Portland area. We had planned to stay in the same hotel as we had earlier, in Wilsonville. But that one had been undergoing renovations and the parking lot wasn’t as trailer-friendly as we’d hoped, so I found another hotel in Hillsboro, Oregon.

We had an event Saturday (tomorrow) in Beaverton, near Hillsboro and Portland, and an event in Salem on Tuesday. Salem is about an hour south, but we decided to stay in Hillsboro and drive that hour down and back on Tuesday instead of checking out and staying in Salem. Because after Salem, we’d be heading north to Washington. That’s another thing we’re learning on this trip: what is really an “inconvenience.” Is an hour’s drive lesser than, greater than, or equal to the hassle of packing, loading, checking out, checking in, unloading, unpacking? In this case, the drive was less than, because we’d have to backtrack that hour the next day, anyway.

So, we took our time driving from Eugene to Hillsboro. It was only a two hour trip, so we got to town before check-in time. We unhitched, and went looking for lunch. We found a place nearby and settled in. Copper River reminded me a bit of Lazy Dog. I had a green chili chicken enchilada that was delicious.

After lunch, we decided to find a couple of wineries for some tasting. There were two near each other, and about fifteen minutes away, so we headed first to Blizzard. The gal pouring was very nice, but we thought the wines were just okay. We didn’t buy anything there. Next up was Oak Knoll. We enjoyed these a bit more and bought a couple of bottles, including a pinot rose.

By now we could check-in, so we drove back to Hillsboro and the hotel. We made some phone calls and talked with friends for a bit, then I had a conference call with two of my critique partners. We had lunch leftovers for dinner and then sat in the hotel’s spa for a few minutes before bed.

Today’s event is at the Beaverton Farmer’s Market. We got there plenty early to get situated on the street. We talked to the market “Marshal,” and learned that in the summer, this farmer’s market gets 15,000 visitors on a Saturday! They expected only about 4,000 today.

We were near a couple of food trucks that were starting to make breakfast wraps. Rebecca and Sophie, our Oregon consultants, soon arrived and we got all set up.

This was a really fun event, for lots of reasons.

1) Our long-time friends, Tom and Nancy, have a very good friend who lives in the area.

I’d texted Robin and she came by! We’d heard a lot about Robin, had prayed for her and her family, but had never met her until today. It was wonderful to finally meet her in person and she’s just as lovely as I knew she would be. Having Tom and Nancy (not to mention the Lord) in common, enabled us to chat like we’d been friends for years, not meeting for the first time.

2) The people who came through for tours were really interested in the trailer and in what they learned.

3) I learned some things. A recovering addict took a tour with me. She did meth, she said, not heroin. In my spiel, I talk about a myth from the 1960s and 70s, when heroin users would pull liquid heroin into a syringe through cotton, thinking it filtered out impurities in the heroin. It doesn’t. They were just picking up bits of cotton fiber. They’d reuse the cotton and, over time, bacteria builds up and then they’d be injecting themselves with heroin, cotton fiber and bacteria, and getting sick with respiratory infections. This recovering meth addict told me, “Yeah, it’s cotton fever.” So I learned that factoid! Also, several parents of addicts came through and were grateful for the education we’re doing. They talked about signs they’d missed, about how well their kids are doing now (or not).

4) We got to buy some delicious food, too. David bought some pears and some salmon spread that we had for dinner with crackers and cheese that night. He also bought us some tacos from one of the food trucks for lunch that were fabulous!

At about 2:00 the market officially closed and we packed up and had to get out quickly because there was a funeral scheduled at the church we were parked in front of.

We dropped off the trailer at the hotel and then went shopping. Because there’s no sales tax in Oregon, we had offered to pick up some things for family members. We bought some shot gun shells for a hunter and a birthday present for a grandson.

We watched our home church service online, then I did my mid-month work. We called and video-chatted with one daughter and grand-daughter, then we went to dinner and a

movie. We saw Midway, which was very good, and we talked about what was accurate and what was embellished by Hollywood.

At Stanford’s, we shared one of their specials, salmon with a beurre rouge sauce that was to die for.

Another quiet day. I worked until about 2 PM, then we went to Cooper Mountain winery for a tasting and had a great time. The tasting room manager, Alicia, is from California and had worked in Napa. She and David talked quite a bit about their Napa

favorites. A sweet, but young and rambunctious dog, Webster, was on hand too. We bought some wine for Thanksgiving dinner, then went back to town. We shared a snack in the truck then watched another movie. This time we saw Ford vs Ferrari, another chance to read and see what was accurate and really happened and what was Hollywood taking liberties with in the story.

After the movie, we got to video chat with our other daughter and grandchildren, which is always the highlight of our weeks.

We finished with another soak in the spa and then bed. Tomorrow would be our long day in Salem.

We left Hillsboro at 7 AM, to get to Salem at 8. Of course, there was traffic, delaying us a bit, but we got there and were set up in front of the Capitol by 9. The truck couldn’t be attached to the trailer in front of the building all day, per the Capitol police, so David unhooked and parked off site, then came back.

This day was definitely focused on getting legislators to come through the trailer and take the tour. I had a woman from the Grange, and a few staffers and one or two legislators. So, overall, I think it was a good day. It was very cold. Definitely a day we’d have enjoyed being able to get in the truck for a few minutes to thaw out, if it had been available.

Walking back from parking, David had passed a sandwich shop, so he backtracked to get us some lunch, which we ate in shifts at the back of the trailer. Eating, drinking, and bathroom use are practicalities that we always have to think about on the job. We have to stay hydrated, so we both always carry a water bottle. But some days bathroom facilities aren’t nearby. But also sometimes the weather is such that no matter how much I drink, it’s fine, I don’t need a bathroom. It’s crazy. And it’s true of cold days, just as much as warm days. I didn’t use the bathroom at all, this day in Salem. In spite of two cups of coffee and two bottles of water. At the Iowa State Fair, when it was super hot and humid, I’d drink 5-6 bottles of water and not need the bathroom until 4:00 in the afternoon. Is that TMI?

Anyway, back to our day.

I have recently reconnected with a high school friend from Castro Valley, California. Heidi now lives in Salem and we had made plans to meet for dinner at 5:00. Because of the cold and because we had no one come by after 3:00, we started packing up at 3:30. 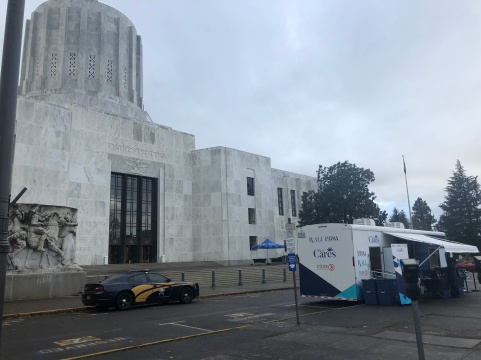 We got permission to leave the trailer in front of the Capitol for a few hours, which was perfect. We’d chosen a restaurant, a local Oregon chain, that we’d started to go to in Eugene, before our Uber driver convinced us to go somewhere else. We still wanted to try the original destination and there was one in Salem. So we’d chosen that place, thinking we could park the trailer there. But since we had permission to leave it, that seemed the better option. And good thing, because the lot at the Ram was not trailer-friendly, at all. 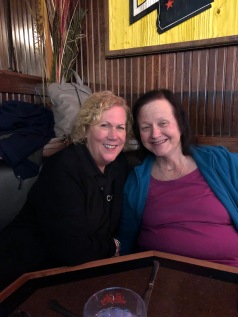 We got there a good half hour early. I texted Heidi that we were early and she hurried over. I didn’t want her to rush, but I also didn’t want her to think we were bored and waiting for her. We were happy to have a few minutes to decompress and warm up while we waited. I had the blackened chicken mac and cheese and had plenty of leftovers to take home for lunch.

Heidi and I hadn’t seen each other in probably forty years, maybe more. We had a lot to catch up on! She’s still an animal lover and a wonderfully kind person.

After dinner, a panhandler waited outside the restaurant. We don’t often give money, but will usually buy someone a meal. David offered to go back in and buy the man something to eat. He refused, saying he just wanted a beer. To my shock, David gave him $5. David said later, “Yeah, I never do that, but he was upfront about what he wanted, so I figured why not?” As David walked Heidi to her car, the man disappeared into the restaurant. I guess $5 + what he had was enough for his beer.

We went back to the Capitol, hitched up, and drove the hour back to Hillsboro, our spa, and our bed.

Tomorrow: Off to Washington!