Our day started when the alarms went off at TWO THIRTY AM!!! Don’t forget, we’re still partly on Pacific Daylight Time. We did our best to go to sleep at a decent time, but I think I managed … maybe 4- 4 1/2 hours sleep…? Dave got maybe another half an hour (because he’s a man?? he fell asleep sooner??) I don’t know. I just heard the alarms at 2:30 AM.

We were close to our goal of leaving our hotel in north Indianapolis by 3AM. And, thankfully, the accident that delayed our journey delivering the trailer Sunday evening had been resolved, so we made it to our venue in about  35 minutes. We were the first to arrive.

I’ve mentioned that we spent several days transcribing notes, studying those notes, making sure we have our facts correct, etc.

Today is where that came into play.

We got to the Beech Grove City Hall venue about 4:05. Again, a reminder, this is AM!!! Dave and I quickly set up the trailer, unloaded the boxes of supplies (literature, water bottles, Rx drug destruction kits {each one costs —$40.00!!!!! and they’re handed out like they’re candy!!!}. But never mind. I’m not an accountant. I’m not a drug specialist. I’m just a mom, a grandma, and someone who works with words.

Our consultants/PR reps showed up shortly after, and they set up their display tables.

We had previously decided that I would be the “public” face of Code 3 and our time with the trailer. I previously alluded to our strengths (DRP: charisma and people skills. CLP: succinct and articulate).

The early morning news shows were next. Honestly, I’m not sure I was awake enough at that point to know/remember what I said. I did four one minute spots with one station and two two minute spots and a Facebook Live with another. After that, they blur together. There were at least two more on camera walk throughs. Two newspaper 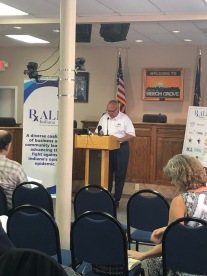 interview/walkthroughs. And Dave says there was a radio interview also, but I have no memory of that. There was also a news conference in Beech Grove City Hall to announce some grants the city received for their drug education program, but we weren’t part of that. I did attend and got to sit for a minute and managed to not nod off.

I found that it’s a very narrow and somewhat tricky path to navigate. We want the media to help us get the word out about the trailer, but we don’t want them to show all of what is on the tour/in the trailer. Because if everything is shown on tv, why would anyone want to come and see it in person? I was deliberately keeping a few things from the news gals in the early morning, but somehow one of them heard about it and she brought it up, so I had to go along and show it. We do have one display of all the various drug paraphernalia we show, all in one place, and we asked that it not be shown. And I asked one tv reporter to be sure and say there was more to be seen and to please come and see the trailer itself and take the tour. He said he would.

Everyone, from the media to the city hall people, to the moms and dads who took the tour, all were very impressed and eager to tell others. 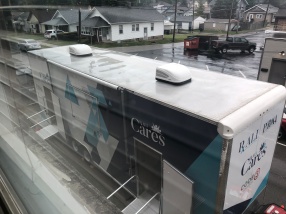 A major wrinkle in the day was a rainstorm. We had cardboard boxes of supplies stacked outside the trailer. Dave and another gentleman dashed to a nearby auto supply store for a tarp to cover them, but they still got pretty wet. We moved the tables of totes and water bottles into the trailer. The good thing about the rain is the humidity finally broke and the late afternoon and evening were quite pleasant.

The event officially ended at 2. We packed up with the consultant’s help, hitched the truck to the trailer and headed back to the hotel. Once parked and unhitched, we couldn’t bring ourselves to go out again for dinner. Breakfast had been a Starbucks coffee and sous vide egg bites at 6 am on the sidewalk beside the trailer. Lunch was a piece of beef jerky and pretzels on the sidewalk beside the trailer. We’d planned a nice dinner, but we were beat. Door Dash to the rescue. I ordered dinner from a local Italian place and we ate on the patio outside the back of the hotel. It was just what we needed.

Our next event is a farmer’s market on Thursday.

Unfortunately, the Indianapolis Colts Training Camp event has not worked out. We’re not sure where we’ll be after Thursday. If there’s more to do in Indiana, we’ll stay here. If there’s nothing else booked, we’ll head to Minnesota for the trailer’s next event at the Minnesota Farm Fest.

We’re planning a low-key day tomorrow. Laundry. Work. I’l post links as they become available. Thank you for your prayers! They were definitely felt today!!

Another day that started out so nice and calm and lovely and ENDED IN A CRAZY FRENZY OF *%$#&**%& what just happened??

We joined our local and long time friends Lyndel and Carrie Moe at their church then we all went to lunch at a BBQ place called Big Hoffa’s BBQ. And, I’m sorry to say, I was so hungry that I once again forgot to take any pictures. We got a sampler platter that we all shared. Brisket, ribs, rib tips, mac & cheese, garlic rolls (to die for!) and seasoned french fries. All fabulous.

Then we went back to the hotel in a food coma. Dave stretched out on the bed to “study,” but soon fell asleep. I read for a bit. We got an email saying we had a go-ahead to take the trailer to the venue for tomorrow’s event, a city hall in a small town, Beech Grove, surrounded by the greater metropolis of Indianapolis, about 30 minutes away from us.

Dave woke around 4, and we hooked up the trailer and headed out. Except my trusty Google maps app showed an accident on the freeway was causing a significant delay, about 20 minutes. There were two alternate routes. Greater Indianapolis is surrounded by a freeway, the 465. It goes East, West, North and South. I’m not kidding. One of the alternate routes just took the 465 the opposite direction. That was about 10 minutes longer. The other alternate route went straight through Indianapolis and was only about 6 minutes longer. So … I chose that one. The other two routes, I cross-checked with our trucker/RV/annoying-harpy-app. (Remember her from yesterday?) But I neglected to check the through-town route with her. (You see where this is going, right?)

Sure enough. We were 3 miles from our destination (after going through some reeeeaaallly sketchy neighborhoods and narrow residential roads with low hanging branches), Dave looked ahead, and there’s an overpass we have to go under labeled 10′ 7″. The trailer is 13′ 5″. Uh oh. The trucker/RV/annoying-harpy app knows our dimensions. *&^%#&(^@$!!!! Though no one actually swore.

And by God’s grace, Dave saw it in time. So we pulled into a parking lot and I opened the trucker/RV/annoying-harpy app and she was able to get us there without much further incidence. In a bit of poetic justice, we had to stop for seven minutes for a train that if we were three and a half feet lower, we could have avoided by going under the bridge on the original route.

We made it to the venue, only to discover that the parking directions we’d been given were for a one-way street and we’d be facing the wrong way. Sigh. I had a phone number for a local contact to call. Which I did. And she ignored it. Because it was an unfamiliar number at 6 pm on a Sunday. I get it. I left a message. She called me right back. She’s local, so came over right away. We showed her our dilemma. The trailer has doors on one side. The wrong side for the one way street. We decided to pull the trailer around the wrong way.

Our plan had been to set the trailer up completely, do a couple of practice tours with each other. By then, it was almost 7 pm. Rain was predicted for 7 pm. Clouds were gathering. We unhooked the trailer from the truck. We put up cones to save a spot for the truck tomorrow. And so much for any practicing. We left.

We have to be back there at 4 am tomorrow.

The good news is that the accident was on the opposite side of the freeway, so we could use the freeway to go back to our hotel. The bad news is that we could see there will be freeway construction going on in the middle of the night. Just when we need to be coming back. So we’ll be taking the second freeway option in the morning.

As we pulled off the freeway for our hotel, we passed a White Castle. Another non-California (or non-Central Valley?? chain) that we’d planned to visit. We’ve heard good and bad about it, but decided to pick up some sliders and have a quick dinner in our room. We just ate, and now we’re going to bed. We have to be up at 2:30, to leave by 3:00. We want to be on site by 3:30-3:35, because we still have to set up the trailer (which we didn’t do tonight–see above re: parking, one-way street, and rain woes) and be ready to go by 4 am. So no pictures for today’s post. I did take a few, but … good night!!