We’re not huge Quentin Taratino fans. We haven’t seen either volume of KILL BILL. I saw PULP FICTION and GET SHORTY years after their releases. But last week, DJANGO UNCHAINED was on and we had nothing better to do, so we watched it. 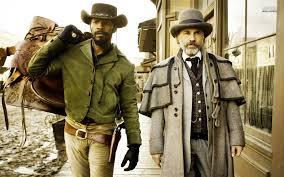 It was much better than I expected.

The violence is quick and often and over the top, with heads exploding and blood geysering, and … well, let’s just say there’s a grisly sequence with dogs and a runaway slave.

Yet there is a code for the violence. The final half hour of the movie is a blood bath, but the good guys prevail. Unlike real life, in the movies, we can fashion the ending we want.

Django is a captured slave at the beginning of the movie. Dr. King Schulz “buys” Django to help him identify some outlaws. Before you can say “Slaves on horses,” the pair are a team of bounty hunters, making money and killing bad guys across the west and south.

Until they meet up with Calvin Candie, an evil plantation owner in Mississippi. The ending is a foregone conclusion, but no less fun for the ride. Just feel free to cover your eyes when the hounds bay.