After my last post about Chicago, I thought I would be right back to finish up the rest of the Chicago adventure, but life and travel and work conspired to keep me busy. But I’m back.

An event in Hillside, Illinois, sponsored by Illinois State Senator Kimberly Lightford. She was a pleasure to meet and her staff were wonderful to work with. It was a small event, in the parking lot of her office. The property manager wouldn’t let us set up where we were visible from the road, so there were few to no walkup visitors. But the visitors we had who sought us out were fabulous. We had an officer who’s the school liaison, and the mayor of a neighboring township, as well as the senator. The officer had a tattoo of his daughter’s name on his arm–Amber. (Some of you know where Dave has his daughters’ names tattooed.)

In personal news from home, we got some great news and some bad. My mom was rear-ended and got stitches on her forehead. The pictures were very bloody and I’ll spare you those. She’s recovered well, though the same can’t be said of the car: it was totaled.

Returning to our hotel, the CoPilot app took us on a crazy route through residential areas that we had no business going in. CoPilot: Strike 2. But on the upside, we passed an Irish 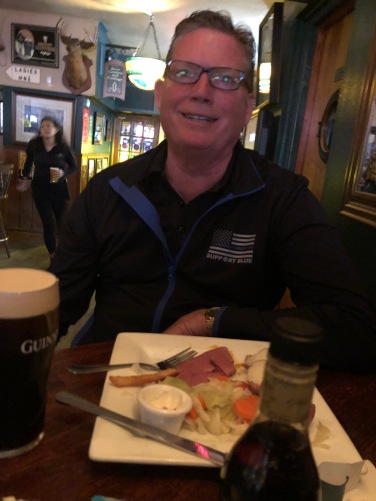 pub that looked good, so once we changed from CoPilot to Google maps and found our hotel, we dropped off the trailer and went to Irish Times for dinner. It was as real an Irish pub as we’ve found in the U.S. It even smelled right, like a peat fire. I don’t know how they did that. Our waitress said the owner is Irish and he and one of the waitresses were in Ireland just then, getting married that weekend. Dave had corned beef and cabbage (which apparently is not actually eaten by the Irish in Ireland, according to our Irish family), and I had fish and chips. Both were excellent.

Our event today was at the Way Back Inn, a half-way house in Maywood, Illinois, sponsored by State Rep. Emmanuel “Chris” Welch. I was privileged to give him a tour and he was impressed with the trailer and the information he learned. We talked privately for a few minutes after. A friend of his had taken the tour with him, and the young man’s mother is an addict. He said it was good for his friend to see this and be educated about what to watch for. We talked about the toll addiction takes on a family. I got a little teary myself then, knowing the toll my own family has paid and he expressed his condolences.

This event was small in scope, also, but still, those who came through were impacted. One of the men I gave a quick tour to was a resident of the home, a former addict. We educated each other. He gave me an idea for one more item that could be in the trash (he said it was how his parents knew he was dealing), and I showed him a hiding place he’d never used. He was fun to chat with.

After our great Irish pub experience last night, I’d been thinking: what other cuisine is

Chicago known for? Duh! Chicago deep-dish pizza! Thanks to my trusty Google, I found a highly rated local chain with a restaurant not far from our hotel. We dropped off the trailer at the hotel as it started to rain. By the time we got to the restaurant, it was pouring. We were there early enough on a Saturday that we didn’t have to wait for a table, though we did have to wait for the deep-dish pizza. It takes about 35-40 minutes to bake. So we started with some deep-fried cheese curds to tide us over while we waited. And it was worth the wait! I don’t know that I’d have it all the time, instead of the pizza I grew up with, but it is definitely worth having occasionally.

Today, we were up early for our event at Willow Brook High School in Villa Park. In the elevator as headed out, we saw a groomsman from a wedding at the hotel last night. Dave asked him about the wedding, and he said it was awesome, everyone had a great time, in fact he was just heading to bed. As he got off the elevator, he said, “Go, Bears!” We chuckled, and Dave muttered, “Go, Raiders.” I remarked that he was just going to catch a nap before the Bears’ game. We didn’t realize the Bears and the Raiders were playing that day.

We found out also that our event was scheduled for a Sunday morning (over our local contact’s protest that people would be in church and we’d have a low turnout) because the Bears’ game was in the afternoon and definitely no one would come during the game. So we found the school parking lot and set up. The local legislator, State Rep. Deb Conroy, and one of her staff members came, as well as a few school administrators. I had one woman, probably in her seventies, who told me she left her husband at home getting the grandkids ready for church, but she wanted to take the tour and learn all she could from the trailer.

As great as most everyone is, we do run into an occasional jerk. And we had one today. I think he was on a local council of some sort, and he was eyeing a higher office. He monopolized conversations with the representative. I offered him a tour and he said, “Yeah, I’ll be right with you,” and proceeded to keep talking, sitting on our tables, and taking up everyone’s time and attention. Half an hour later, he joined a tour, then after five minutes, looked at his watch, said, “Oops, I’ve got to go to a meeting.” He left, then stood outside talking for another twenty minutes. It was very obvious why he was there and it had nothing to do with caring about raising awareness about the opioid crisis in America.

The nice thing about an early event is we were done, packed up, and back at the hotel by 12:30. David even got to watch some of the Bears/Raiders game. We stayed at the hotel for the rest of the day, ate some of our leftovers for dinner, and visited the hotel pool for the first time.

We had an evening event, so I worked most of the day while Dave did laundry and read. We went to Waukegan High School and set up. We were basically on the sidewalk, next to a door into the school. They were having a workshop on getting financial aid, and how to fill out the FAFSA, sponsored by two legislators. Both of them stopped by and took tours, a very enthusiastic school security officer came through, and several parents as well. State Rep. Rita Mayfield, came through for a tour. Congressman Brad Schneider was a co-sponsor of the event also. Some of his staffers came through, as well.

There is usually a freelance photographer at our events, hired by PhRMA, to take pictures of all the events, of the legislators, of the people on the tours. Sometimes a video team is there as well. For all our Chicago events, we had the same photographer, Ty. He’s the guy who called his wife to come be a person we could talk to at the soccer fields when we got zero people to come to our display. He’s a really nice guy and we enjoyed getting to know him. We had a few more days with him, but now feels like a good time to mention him. Because …

We were up and out early, by 7 am, and headed to the south side of Chicago, for a health fair at a community park. Inside they offered flu shots, bone density tests, blood pressure readings, and lots of information. Elgie Simms Nick Smith

Getting there at all was a bit of an adventure. I’m now in the habit of mostly using Google Maps, but I cross-check the route with CoPilot. Heidi, our local contact (I call her “local,” but she’s actually from Missouri, so maybe I should say she’s our Midwest contact), 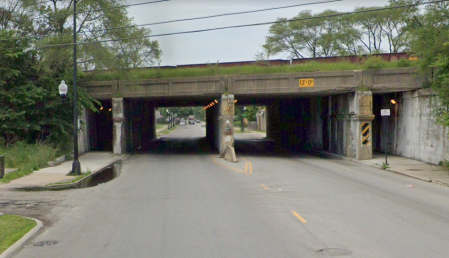 texted to say what street we should approach from to get the best angle to bring the trailer into the driveway. I put that into Google, and two blocks from the park, we came to a low train trestle and there was no way we we’d make it under there. Luckily, there was a wide dirt area where we could tell we weren’t the first one to use it to turn around. CoPilot found an alternate route with a higher trestle that we sailed under just fine and then we were back on track.

South Chicago has a certain reputation, and I don’t know that I’d want to visit after dark, but I felt fine there during the day. There is apparent poverty and crime, but there are also lovely neighborhoods where the residents are obviously working hard to keep their homes safe attractive.

We were fairly busy this day. Everyone who came through the trailer was amazed at what they learned. I remember one woman in particular was blown away by everything I showed her. I realized I had formed an opinion that “everyone” on the south side of Chicago knew all about drug use and would be aware of everything already. No. These were mothers, grandmothers, aunts, uncles, fathers, grandfathers who wanted to educate themselves and keep their families safe.

Ty and I chatted about the importance of various health screenings and somehow we got on the subject of colonoscopies. He said his mom had scheduled one because her doctor’s office told her she needed it. Well, English is not her first language, (I think he’s Filipino), so when it came time for the prep, he explained to her what exactly she had to do for the prep and what the test involved. She immediately canceled the procedure. 🙂

Tomorrow, we leave Countryside, Illinois and the hotel that’s been our home for the last ten days.