Finally, I got my food pictures from my phone to my laptop. I forgot to take pictures of a few things, but we have nine days of fair food to share and talk about!

The choices were overwhelming, truly. The fair website has a subsection devoted to the food only. Then there are pages listing what foods are new to the fair that year, as well as healthy fare, and food on a stick. Because of course.

We shared most of our meals and we walked a lot, which is why our clothes don’t feel any tighter. There was a preponderance of fried options, so every couple of days we needed something green and would track down a salad.

Our first fair lunch we wandered to one of the food thoroughfares and just took it in. 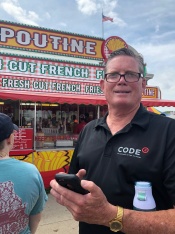 Dave left it up to me to choose and I had literally no idea. Until I saw:

I’ve seen poutine on television, and even had it once, several years ago, but needed to try it again. It seemed like a safe choice for a first meal. I forgot to take a picture of the actual poutine, but for the uninitiated, it’s french fries and cheese curds with gravy on top. This poutine stand offered toppings on the fries, like garlic parmesan, bacon, pulled pork, sour cream, sriracha, or pork belly. We stuck with the original on the premise that you have to know what the original tastes like before you experiment.

There’s also a brochure that lists all the some info from the website, so for dinner Dave listed some of new to the fair choices. He thought it sounded weird, but I wanted to try the pickledawg. It’s a hollowed out pickle filled with a hotdog, then dipped in corndog batter and deep fried. It does sound weird, but also intriguing. 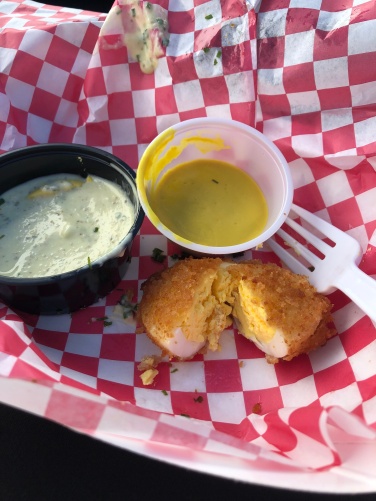 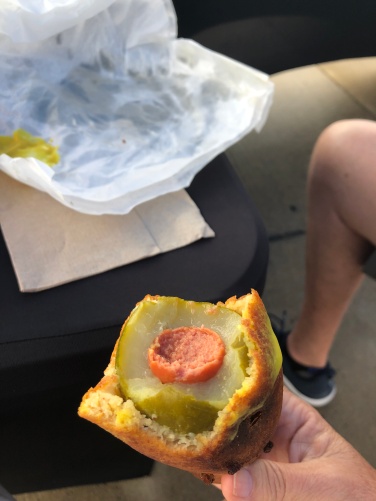 He went on the hunt and returned with the pickledawg and deep fried deviled eggs for a starter. The eggs were good, but the sauce to the left was really good. It was almost a tartar sauce, but with a kick of mustard that made it special. I enjoyed the pickledawg and even Dave said it was better than he expected. The salty tang of the pickle stood up nicely to the sweetness of the corn batter and the hotdog wasn’t lost in the corn.

Since I have 9 days to cover, I’m going to post the pictures with captions and only talk about the highlights. Hover your mouse or click on the pics below to read the captions. 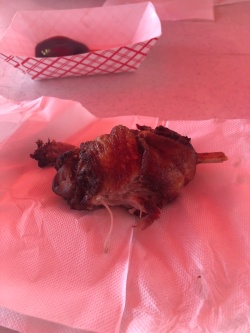 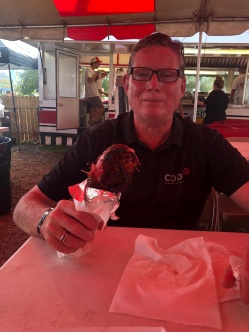 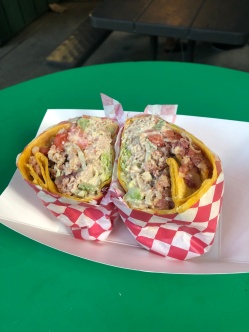 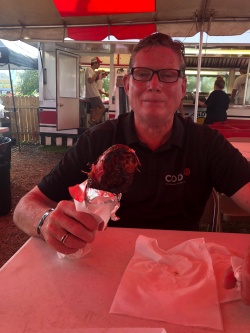 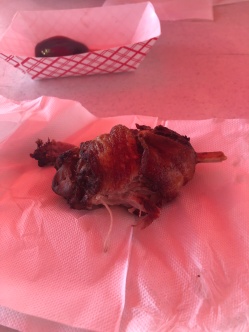 Chicken Salad BLT wrap
I neglected to get a picture of one of our favorites. I’m ticked at myself, because it was amazing! It was called a Berkshire Bacon Ball. It had a cheese ball center, surrounded by seasoned ground pork and bacon, wrapped in bacon, smoked, dipped in BBQ sauce. It was wonderful! So many layers of flavor, sweet, smoky, savory in every bite.

Aha! Thanks to the magic of the Internet, I found a picture of it in the fair’s new food brochure: 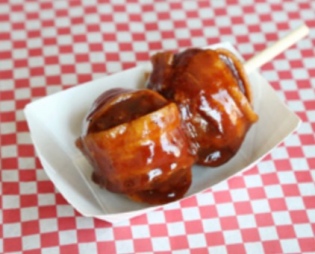 Another food I neglected to take a picture of was a piece of pecan pie on a stick. Yes, pie on a stick. It had a really thick crust. Dave can’t eat nuts. I can’t eat much sugar. So he had a bite of crust and gooey sauce. I had a couple of bites. We gave Steve a bite, then we threw out the rest. It was fine, but we’d rather use our calories for meat, cheese, and more meat and more cheese.

Also undocumented but delicious: deep fried garlic cheese curds, crab fritters, and fried mac & cheese bites. The fried cheese curds were a perfect combo of creamy and crunchy with the added bite of garlic. Same for the mac & cheese bites, but without the garlic. The crab fritters were like a crabcake, but in a ball. Really really yummy and the sauce was amazing. A remoulade, not a tartar sauce.

Okay, back to my own pictures and captions. 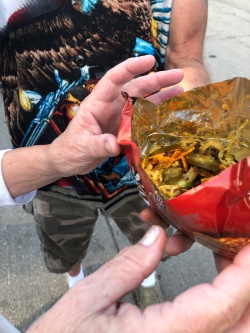 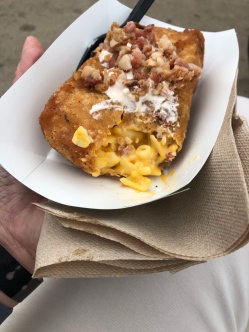 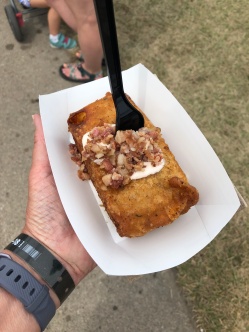 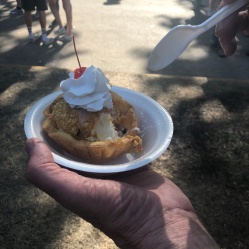 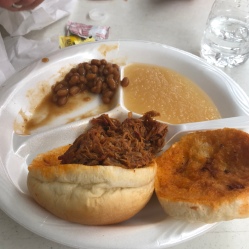 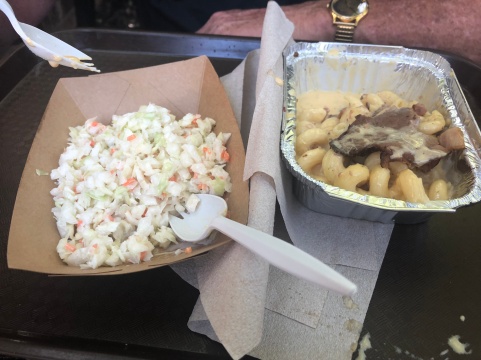 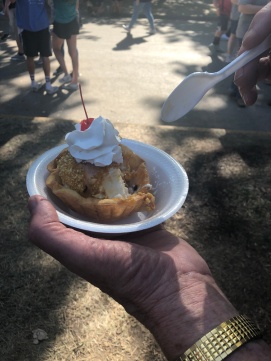 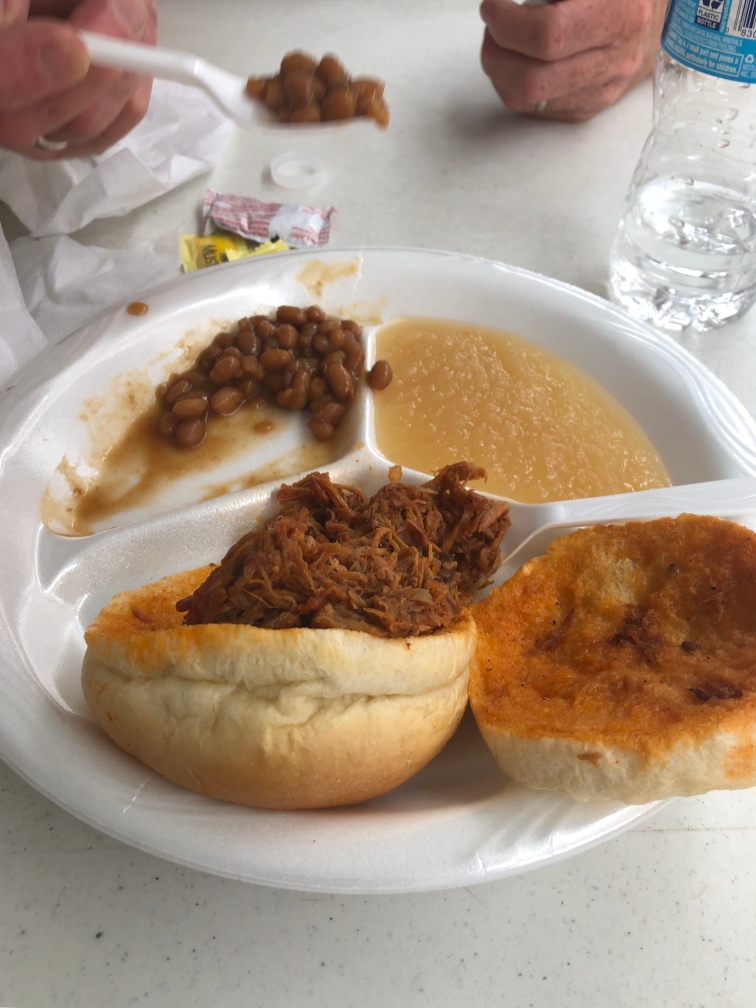 Pulled Pork sandwich, beans, applesauce. The pork was fabulous!
I should note here that Iowans are very, very proud of their pork. Lots of people walking around the fair wore shirts proclaiming them to be proud pig farmers. And truly, the pork was the best we’ve ever had. The pulled pork sandwich above and the pork belly on a stick below were from the Iowa Pork Producers building/booth/take-out/restaurant. 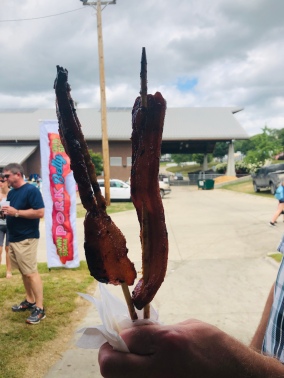 The pork belly on a stick is just what the sign behind it says. Brown sugar. Yumm. Pork belly (basically thick cut bacon) on a stick. What’s not to love? 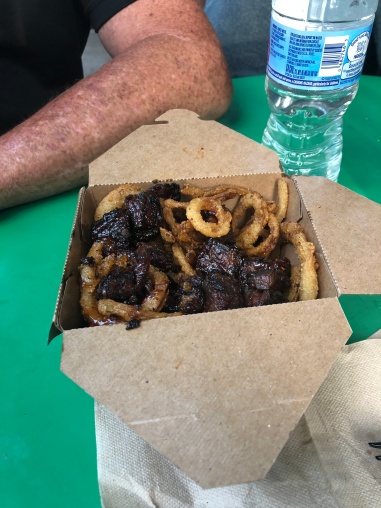 Burnt ends on fried onions. A definite highlight. I thought they were delicious! They were $13, so definitely on the pricey side. And when the server handed it to David, he told her to put more meat on. The serving was pretty skimpy for the price. But with the “enhanced,” portion, we felt full. He said she kind of glared at him, but she did as he asked.

Final pictures are of the random people Dave chased down to ask what they were eating. 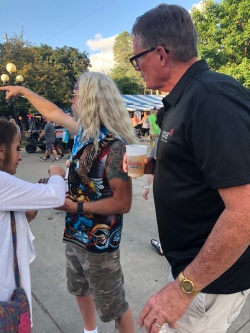 Pointing out the Walking Taco. 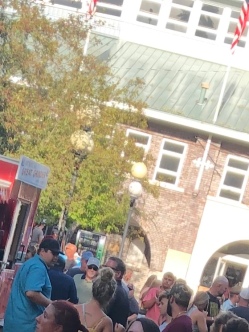 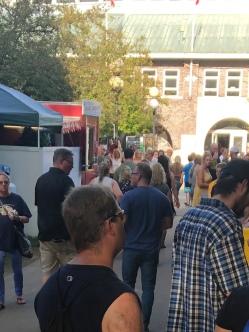 The Chief. A wrap that we didn’t get to try.
I know Iowa is also very proud of their corn, but besides nuts, Dave can’t eat corn, so we didn’t partake of any sweet corn or popcorn. We also didn’t get a funnel cake although we intended to since Steve wanted one, but didn’t want a whole one by himself. What can I say? 9 days at the Iowa State Fair just isn’t enough to try all their offerings.

We’re now in Ogallala, Nebraska. We have an event in Julesburg, Colorado tomorrow. I hope to blog again tomorrow evening about my final impressions of the Iowa State Fair, the people we met and talked to, and whatever other random things occur to me.

Then I’ll catch us up to current days. Thanks, as always, for reading!