Going to bed early last night helped (as did changing from Eastern to Central time). We woke before 7 AM, and were ready for breakfast when the hotel served it at 7:30. We checked out, hooked up, and hit the road at 8:45 AM.

Our destination was Austin, Minnesota, home of the SPAM Museum. So we could visit Monday morning before we head to Morgan, MN, home of the Farm Fest, to deliver the RALICares Trailer to its next venue.

I know. We were in Springfield, Illinois. Birthplace of Abraham Lincoln for 18 hours and couldn’t fit in a museum or historically significant site. (Although we ate a Horseshoe!) But we made it a point to be in Austin with time to visit the museum that pays homage to pickled/preserved/processed meat products. Believe me, I’m shaking my head in disbelief too.

Anyway … the journey started off easier. There was no cross wind, so we stayed in our lane without much effort.

Illinois is full of corn and soybeans and it’s green and beautiful.

After a few hours, we moved into Iowa.

Iowa is full of corn and soybeans and it’s green and beautiful. 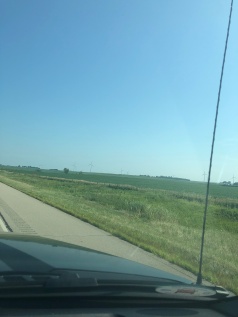 easily on the road. We stopped for gas at a Flying J that had a Denny’s attached so we had lunch there. We’ve done enough road trips that we know when we need to take a break. We can’t do ten hour days without getting cranky with each other.

After lunch we changed from a generally northerly direction to a generally westerly direction. And the winds picked up. And staying in our own lane got progressively more challenging. I didn’t think of it until it was too late, but I will be taking pictures and video of Dave wrestling with the steering wheel to keep us going straight and in our own lane.

We crossed the Illinois River and the Mississippi River. We crossed several other rivers, many creeks and lakes. There are fewer animals/livestock than we’d expected. We’ve seen a few horses. One or two herds of cows. A few sheep. But honestly, I think I see more livestock between our house in Madera Ranchos and Fresno than I’ve seen here in the last week in Indiana, Illinois, Iowa, and Minnesota combined. And I’m not exaggerating.

Last night, Dave looked at my Google maps app route to Austin and decreed it unacceptable. The last hour or so appeared to be on a county highway. He decided he’d rather take a longer route and stick to state highways/freeways. Which is fine. After our experience last Sunday, I get it.

But … today, as we drove, I continually cross-checked our route with Google maps and the CoPilot app, comparing the times, making sure we were okay with the length and weight of the trailer. And the biggest factor, to me … David’s favored state highway route added an hour to our day. And it was a more westerly route. We’d been fighting those cross-winds for a couple of hours already and we were both exhausted. He felt like he’d been arm-wrestling Lurch and I was the nervous passenger, afraid we were about to be blown off the road and only maimed, not immediately killed. (I’d rather go quickly, not linger.)

I brought up the two different routes on my phone, pointed out the differences to the driver. One was shorter and more northerly (meaning less cross winds). He agreed to 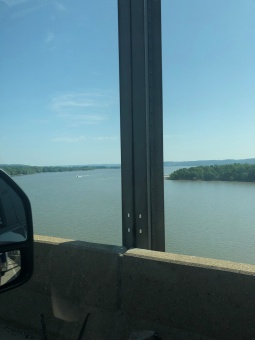 It worked out perfectly. The Google suggested route was definitely more rural, county highway-ish, but it was beautifully scenic, very little wind, and so much easier than the longer route someone wanted to take.

We arrived at our Austin hotel as rain started to fall. We got inside and check in before it turned into a full tornado warning. We ate our leftovers from last night and from lunch, then Dave turned on the television. Yep. A tornado warning for real. He went to the front desk, confessed to being a Californian. “We know what to do in an earthquake. What do we do in a tornado?” The front desk clerk did a good job hiding her grin, but basically said, “You’ll feel it coming. Just go into the center hallway and hunker down. But we don’t expect anything.” Sure. Until you do.

We’re in for the night. The SPAM Museum opens at 9 AM. I guess we’ll be there. Then we’ll head to the venue for the Farm Fest, in Morgan, MN to deliver the trailer. It’s a little over two hours away.

Then Dave and I go on to Minneapolis. We’ll fly home in the next day or two. We’ll be home for a week or so (for a previously scheduled vacation). We’ll be back with the RALICares trailer in Des Moines for the Iowa State Fair on August 9th.

Apparently the regional food of Iowa is a Maid Rite sandwich. We’ll definitely look up that one!