I feel like I’m always a little behind the rest of the world.

I definitely got to the Jen Hatmaker party a little late, but I’m having a great time now that I’m here.

I recently finished 7, her book about simplifying life.

Just what I needed to hear at that point. 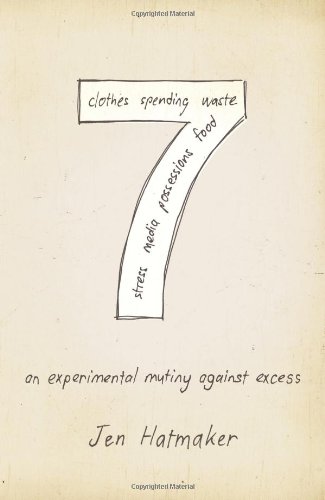 Basically, Jen took 7 areas of her life and pared them down to 7 essentials. She did each area for a month. Some of the practices made their way into her life permanently, others were for that month only.

The areas included food, clothing, possessions, waste, spending, media, and stress. For the month on food, she chose seven items and ate those exclusively for the month. In other chapters, sometimes she was limited to seven items, or she removed seven items, or instituted seven practices.

I’m trying to pare down my own excess in areas and the book helped me look at that and see that it’s doable and may not be quite as painful as I think.

Jen’s writing style is just like her on Facebook and live. She is herself. Warm. Funny. Engaging.

I got a lot out of this book and highly recommend it for anyone curious about how to get out from under the stuff that we, as prosperous and blessed Americans, accumulate as if there was a prize at the end.

My last Book Talk Tuesday post I mentioned that I was in the middle of Jen Hatmaker’s latest, For the Love.

I’ve finished it and it’s on my desk waiting to be delivered to a friend who wants to read it. 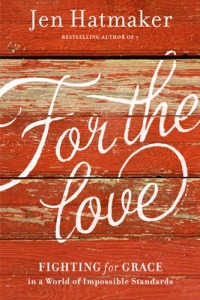 It’s great. It’s full of Jen’s trademark humor and transparency. She’s all about urging us (women, in particular) to give ourselves (and each other) some grace. Your kids may say, “Give me a break.” Your husband may ask for a free pass for forgetting to pick up something on the way home. But they all mean the same thing: Give me some grace. Don’t make me meet some unrealistic standard set by our post-modern culture.

The chapters alternate randomly between pure hilarity and serious lessons, and even a few recipes that I’m dying to try.

In some ways, I equate For the Grace with Anne Lamott’s essays urging us to let go of the things in our head that tell us how we should be and just go fetch water for someone thirsty.

For the Love would be a great place to find some everyday grace. I highly recommend it.

I did not receive a free copy of this book. I purchased it with my own money and I still gave it an honest review. 😉

A quick look at what’s coming up to the top of my To Be Read stack.

First up on my Kindle is Neanderthal Seeks Human by Penny Reid.

A couple of people have recommended this series quite highly and I’m looking forward to diving in.

I’ve just started another Susan Mallery, Only Yours, a Fool’s Gold book from a couple of years ago. I’m working through her older stuff and so far this is another winner. 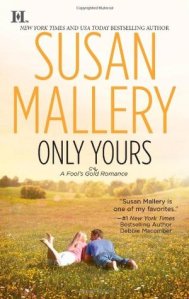 Finally, I’m also reading Jen Hatmaker’s latest, For the Love. I’ll probably be reviewing this one next week. It’s full of wisdom, grace, encouragement, and a few recipes. 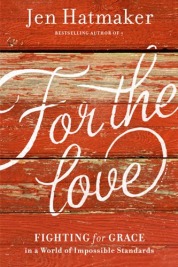 A dear friend says this book changed her life so I picked it up and put it on the top of Mt. TBR. I finished it last week.

The description from the author, Jen Hatmaker’s web site:

Interrupted follows Jen’s messy journey through life and church and into living on mission. Snatching Jen from the grip of her consumer life, God began asking her questions like, “What is really the point of My Church? What have I really asked of you?” She was far too busy doing church than being church, even as a pastor’s wife, an author of five Christian books, and a committed believer. She discovered she had missed the point.

Christ brought Jen and her family to a place of living on mission by asking them tough questions, leading them through Scripture, and walking together with them on the path. Interrupted invites readers to take a similar journey.

This is the first book by Jen that I’ve read, although I did watch a few episodes of the HGTV series following their family’s home remodel.

I’ve had many of the same feelings Jen describes about doing church instead of being church. It’s a concept foreign to many of us in the middle classes, in suburbia, in complacency. Jen writes with honesty and the book also includes a few chapters written by her husband to give his perspective of their journey from a large contemporary church to a new church start-up in a more humble part of Austin, Texas.

I hope I’m as open as Jen to the possibility of change and being called to something uncomfortable. Frankly, I’ve been part of a new church start-up and it was exhausting and demanding and I never found it  greatly rewarding. I know that experience has made me wary of making any changes in my Christian life.

But I hope if God calls, I would be obedient. Because otherwise, what’s the point of calling myself a Christian? It would just be a label, not a lifestyle.

May it never be.