I’ve added a caveat for my list. I can’t include any authors I know well enough to call “friend.”

Because I know once I start naming some of my favorites, I’m afraid I’ll inadvertently leave off someone and I can’t bear the thought of missing someone or hurting their feelings. So this list has the ten best books by strangers, that I read in 2016. A few of the writers I would go so far as to call acquaintances, but we don’t have the kind of relationship that I could email and ask if we could stay with them when we’re passing through town. That’s what I mean by “knowing” them.

Now that that’s out of the way, back to the list.

JD Robb, CALCULATED IN DEATH. All of Robb’s In Death books are fabulous, well-crafted, and shining examples of excellent mysteries. I love them all, but CALCULATED IN DEATH stood out for me this year. The plot was exceptionally well done.

Margaret Maron’s books are often in my To Be Read piles or on my Top Ten lists. But

DESIGNATED DAUGHTERS was stellar in many ways. The mystery is well set up and executed. The red herrings were done so skillfully that I continued second-guessing myself all the way through.

look at a little known person in American history. William Clark was a U.S. Senator from Montana, he made a fortune in silver and copper mining, hung out with the Astors and Vanderbilts and Carnegies. Built huge homes. Amassed a collection of fine art to rival a museum. EMPTY MANSIONS covers Clark’s life, but is focused more narrowly on Clark’s youngest daughter, Hughette, who lived as a virtual recluse but maintained three homes she never visited, one she never even set foot into. It’s fascinating.

BITTERSWEET, and BREAD AND WINE. PRESENT OVER PERFECT is a wonderful story of Shauna’s journey from stressed and overloaded to a simpler life with a focus on what’s important: God and family. I feel like I’m probably just a skoosh too old to fully appreciate all she has to say. I’ve already lived the stressed life (kids, work, social stuff, church obligations, the house — although admittedly not at her level. I wasn’t speaking in arenas). So the lessons were less revelatory to me than they would be to a mom in her thirties. But it was a good reminder and did provoke some though about how to slow down and enjoy life a bit more.

That’s enough for today. The rest of the Top Ten will post tomorrow. Thanks for reading!

Somehow, a couple new releases snuck by me and I’m behind in one of my favorite series, so I grabbed the next one and just finished THREE DAY TOWN by Margaret Maron.

After a year of marriage, Judge Deborah Knott and Sheriff’s Deputy Dwight Bryant are off to New York City for a long-delayed honeymoon. January might not be the perfect time to take a bite of the Big Apple, but Dwight’s sister-in-law has arranged for them to stay in her Upper West Side apartment for a week.

Deborah had been asked to deliver a package to Lieutenant Sigrid Harald of the NYPD from Sigrid’s Colleton County grandmother. But when the homicide detective comes to pick it up, the package is missing and the building’s super is found murdered. Now despite their desire to enjoy a blissful winter getaway, Deborah and Dwight must team up with Lt. Harald to catch the killer before he strikes again.

This is the seventeenth in Maron’s Judge Deborah Knott series. It’s also the first time Deborah has crossed paths with Maron’s other series detective, Lieutenant Sigrid Harald. Fans have been asking when the two can intersect and Maron managed it beautifully. I’ve read all the Deborah Knott books but only the first in the Sigrid Harald series, so I may not be the best qualified fan to cast a vote.

Maron lived in New York for many years and her love for the city and her knowledge of its quirks shines through the pages of this story.

THREE-DAY TOWN is a worthy addition to both Deborah’s and Sigrid’s stories. I enjoyed it a lot. Maron writes traditional “fair play” novels and this one is no exception. The clues are played fairly and the culprit is a surprise, but not without reason.

Now I get to read the next one in the series, THE BUZZARD TABLE. Ironic considering this picture I took across the street from our house a couple of days ago. 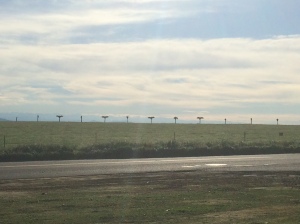 I love Margaret Maron and I love Deborah Knott. Maron knows Deborah intimately and refuses to let her do anything in a book that would be out of character, even if it would serve the mystery that needs to be solved.

I’m thinking of an earlier book when Deborah went into an empty house alone. It’s the moment that usually makes me toss a book across the room. No sane person would do that.

Unless … a child is missing and she hears a child crying inside. Then, like Deborah, a sane person pulls up her courage, grabs her cell phone, and walks through the door.

Each Deborah Knott book also focuses on a current topic (land development, illegal immigration, migrant workers) and Maron weaves the issue into the story without soapboxing.

In Christmas Mourning, Deborah and Dwight are soon going to celebrate their one year anniversary. Dwight’s son Cal is now living with them and adjusting well.

There have been a rash of teenage driving accidents, leaving several teens dead or permanently injured. Maron addresses texting while driving, underage drinking, and drinking and driving.

Mallory Johnson is the latest teenager to die in an accident. Dwight is investigating the solo accident. Tests show Mallory had a bit of alcohol in her system when she died but everyone swears Mallory wasn’t a drinker. Her father had trained her not to swerve for an animal in the roadway. So what caused her to crash?

Deborah’s relationships with her nieces and nephews often play a part of the books and Christmas Mourning is full of the teenagers, running in and out of the house, baking cookies, wiring up lights. I’m always thankful that Maron includes a Knott family tree because it’s easy to lose track of the large family. And it shows that Deborah has brothers and kin that we’ve yet to meet, assuring me of some great books in the future.

The mystery is Christmas Mourning is well set up. The clues are there. I often figure out the culprit before the halfway point of most mysteries. In this one, I knew it was one of two people and I wasn’t completely sure which one was the killer until Maron revealed it at the end.

If you haven’t read any of Deborah Knott’s stories, I encourage you to start with Bootlegger’s Daughter. It’s the perfect setup for the whole series. And Christmas Mourning is a stellar entry.