When we came home for the Alaska cruise, we expected to go back to the Code 3 drug education trailer a couple of days after we got home from the cruise, probably September 17. That changed to September 29, which turned out to be God’s plan all along, since we didn’t make it home until September 21.

We’d been home from the cruise two days, just about caught up on laundry, when we got a call Monday afternoon: could we leave Wednesday or Thursday, the 25th or 26th? I drew a big sigh, revised my to-do list and said we could leave Thursday. Which meant actually leaving Wednesday because for this trip we were flying out of San Francisco, which meant renting a car in Fresno and driving to SF, staying in a hotel near the airport the night before.

The cat had just started speaking to us again. I apologized profusely to him and promised him lots of shrimp or chicken or whatever he wanted when we got back in November. He was not impressed.

I changed our rental car reservation and looked for a hotel near the airport. Well. That did not go well. Everything was super expensive. I think because it was last minute. We’ve stayed near the airport before and not paid anything near those rates. I finally got something through Priceline for double our usual budget. Except while we were on our way to pick up the rental car in Fresno Wednesday afternoon, I got an email that the hotel was reneging and would not be able to accommodate us. So back to searching. I finally surrendered and paid triple our usual rate for a Holiday Inn Express with a shuttle that would take us to the airport at 5 am.

We had an uneventful drive into the city, dropped off the rental car, rode the light rail into the airport, caught the shuttle to the hotel, and checked in. We had to leave before breakfast the next morning, so the front desk staff offered to have a breakfast to-go bag ready for us. We accepted, then went to sleep in our very expensive room which was not worth it since the hotel was being renovated and we were in the midst of a construction zone.

Everything went smoothly the next day, except the to-go breakfast bag was a myth. We left SFO on time and arrived in Newark where we were transferring to a connecting flight to Portland, Maine. We grabbed a quick bite and had just enough time to find the adjunct terminal and our gate with a row of gates for the smaller, commuter flights. We chatted with a young man going to Jacksonville, Florida. He had left Italy and was eager to get home. We were all watching scrolling announcements that due to high winds in Newark, the FAA was restricting arrivals and that was impacting departures. Which didn’t bode well, since we were supposed to be boarding and there was no action at our gate.

Sure enough, the announcement came a few minutes later. Our crew was on a delayed arrival. We’d be delayed at least 45 minutes to an hour. What to do? Find a place to sit and have something to drink. We ended up next to two men who were also on the Portland flight. One was a very loud talker so we had no choice but to eavesdrop. He traveled a lot for business and was headed home to a town outside of Portland. The other man was younger, from Boston, and headed to Portland for a wedding that weekend.

Our Code 3 assignment in Portland was to pick up the trailer where it had been parked a couple of weeks previously, and drive it to the Chicago area. We had an event scheduled for Sunday, September 29th, so we had two days to drive about 1000 miles. Since we had done that a week ago, Bellingham to Fresno, we sort of knew what that was like. But now we’d be pulling a 32′ trailer. Although, we were back to the original trailer that handles so poorly in the wind.

Our personal goal in Portland was to have some lobster. Our flight was scheduled to land at about 7:15 pm, so I’d looked up a couple of restaurants close to the airport that had good reviews and we were ready. But with every announcement, our lobster dinner window was getting smaller.

We finally were called to board. Whew! We got on a bus that carried us out to our plane. David asked another passenger for a dinner recommendation, but he hadn’t lived in Portland for about 30 years, he said, so he was no help. I noticed his luggage tag was his business card and it said Harper Collins. I was just about to ask him what imprint or what he did for them, but didn’t have a chance. The flight was short and we were soon in Portland. The truck had been left for us in the parking garage and the key was taped to the back bumper. It didn’t take us long to find the truck or the key, but the key had been wrapped in 32,000 layers of duct tape (only a very slight exaggeration). It took longer to unwrap the thing than it took to find it. Then, the remote wouldn’t unlock the door. Dave had to open the door with the key, which set off the alarm, until he turned on the ignition. That seems weird to me. If you have the key, why would the alarm go off? Anyway, we were finally in Portland and looking for lobster. I found a restaurant that had great reviews in downtown Portland that was still open, (it was about 9:30 by now) so we headed there. The area was super cute and looked like it would be fun to browse in the daytime.

After wrestling the truck into a parking spot, calling our boss to ask about the key fob (turn the ignition on within 10 seconds of unlocking the door and the alarm won’t go off)  and we were finally ready for our lobster dinner.

Only to find that they sold lobster rolls. Not lobster dinners or lobster tails. Well, beggars and choosiness, yada yada. We had lobster rolls and they were great! The lobster was sweet and tender and delicious. Our personal goal accomplished, we headed to our hotel.

The next morning we drove the twenty minutes to where the trailer had been parked, hooked it up and pulled out. We planned to make it to Buffalo that night, about 8 1/2 hours of driving. We debated trying to fit in a stop at Niagara Falls, but we just had too many miles and not enough hours to get to Chicago. Until Friday afternoon, when we got news that the event in Chicago Sunday had fallen through! All of a sudden, we had an extra day to get to Chicago. Which meant we were going to Niagara Falls! Of course, it’s our nature to never be satisfied, because now we were trying to figure out a way to fit in a visit to Hamilton, NY where Dave’s father was from and where Dave’s cousin lives. But that was too far off our route, by the time we got the news.

Saturday morning, we left the trailer at our hotel and drove to the US side of Niagara Falls, a NY state park. We spent a couple of hours walking through the park, along the river and to the tops of the three main falls, Horseshoe Falls, American Falls, and Bridalveil Falls. 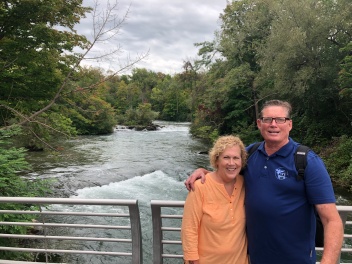 It was fabulous, and I’m so glad and grateful we got to do that. I’m just sorry we didn’t have our passports to see the falls from the Canada side. But that seems greedy, since we had no idea we’d even be able to stop.

It was after 1:00 by the time we made it back to Buffalo, hooked up the trailer and hit the road again. We made a quick stop at New Era Field to take a picture in front of the Buffalo Bills field. 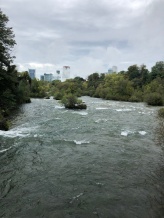 Now we were headed to Toledo, Ohio, about four hours away. After the eight hours yesterday, that was pretty easy, and left us with only about four more hours for Sunday to get to Chicago. We don’t get a lot of notice about locations and times for our events, but Friday I’d gotten a loose schedule and was able to find a suburban hotel about half an hour from most of the events. And it had a huge parking lot, which is a plus with the trailer. It worked out great. We stayed there a week and a half total.

Starting tomorrow, our Chicago events! As always, thanks for reading!