I’m purging some old files and found a few things that I’d forgotten about. 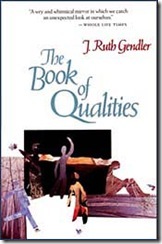 One page stuck in a manila folder was written for a class in response to a book by Ruth Gendler called The Book of Qualities. Gendler took character traits or qualities and wrote short essays from the point of view of the trait.

The Book of Qualities presents 74 qualities–including Pleasure, Anger, Terror, Beauty, and Change as everyday characters who live among us. Both personal and impersonal, the Qualities convey a variety of human emotions in a simple and entertaining manner; readers are inspired to reflect on their own qualities and communicate their feelings with new clarity.

My assignment was to take a few of the qualities and write my own descriptions. Here are my attempts:

Procrastination is a cautious driver, the kind who turns on his blinker a block and a half before he wants to turn, just to warn everyone behind him that he’s thinking about it. He taps his brakes a few times to get the attention of the following drivers before he actually slows. He rents a room from Indifference. He tried home ownership, but he could never get around to all the upkeep and repairs. He wears faded denim shirts over dingy white tees. He keeps forgetting to buy bleach. No one really likes him; he knows that and is a little embarrassed by it, but it doesn’t keep him away from the family reunion.

Perseverance is a marathon runner. She insists on running even during thunder storms. She sings to herself to keep her mind off her tired legs and aching feet. Perseverance is good friends with Stubbornness and Pigheadedness. People sometimes get them confused, but Perseverance is the pretty one.

I’ve decided I like them both. I feel like I’m in the midst of a marathon and I particularly like the idea that between Stubbornness, Pigheadedness, and Perseverance, Perseverance is the pretty one. I needed to be reminded of that today.

What do you think? How would you describe either Procrastination or Perseverance? Or another of the qualities?