Wednesday we had an excursion planned for our day in Skagway. We got up, had breakfast, and prepared to disembark around noon, or just after. We were supposed to meet the tour at the dock and then either ride a bus or a train to the White Pass summit and then ride the opposite mode of transportation back.

Lee and Karie disembarked before us, to explore Skagway a bit. I got a text from Karie that they heard a rumor that a train had broken down and tours were canceled. So we zipped up to the excursions desk to get the scoop, but it was shut down so all the employees could be on the docks, helping passengers.

We went ahead and disembarked, hoping for the best and preparing for the worst.

Sure enough. A morning train had broken an axle and was blocking the tracks. Our tracks. We had the choice of skipping the excursion or taking the bus up and back and getting a partial refund. We decided to go ahead and take the bus.

It was a beautiful trip, full of amazing and rugged scenery. We saw more glaciers and glacial lakes and made plenty of stops for pictures. And, to top it off, we got word that the broken train had been moved and we’d be able to ride the train back to Skagway after all! 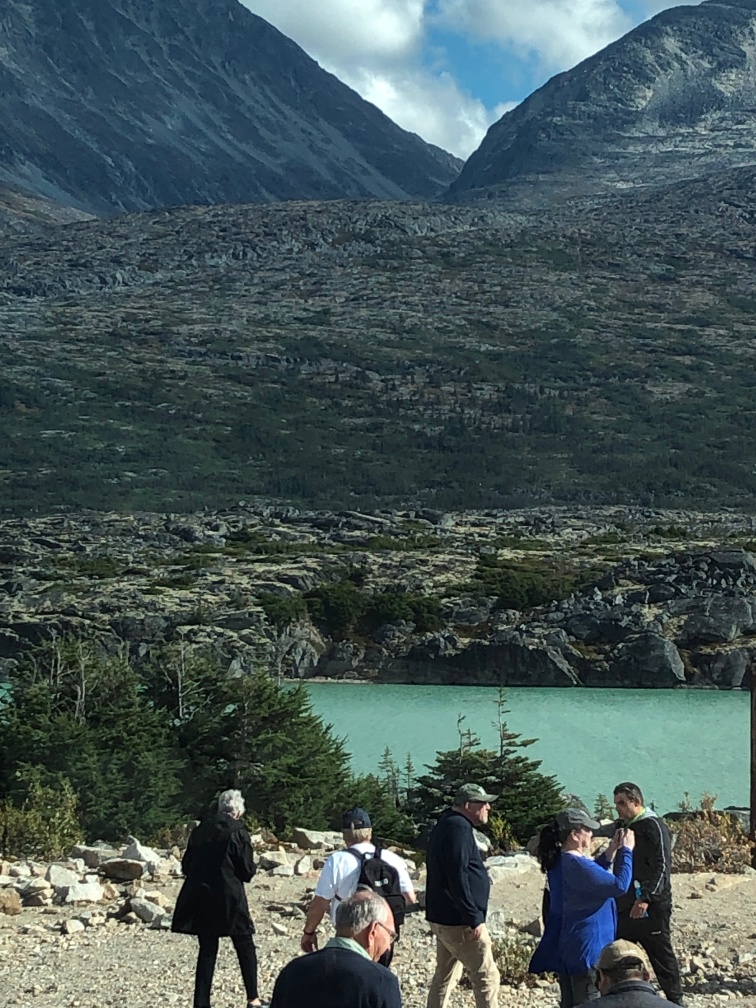 So it worked out perfectly. And we had a small refund on our cruise tab at the end, too.

Anyway, this trip does go into the Yukon territory (in other words–Canada) so we had to bring passports and Canada Immigration officers boarded our bus to check everyone’s passports and paperwork.

The train ride down was spectacular. There was a narrator/guide who told us over a sound system what to be looking for and historical facts about the railroad. It was built to carry Gold Rush miners into the Yukon. It was built very rapidly, for the time, but even so, the Gold Rush was over by the time it was completed. The engineer behind it had a high regard for the safety of the employees and they had a much smaller loss of life than other railroads constructed during the same time period.

At one point, the guide announced we were coming up on a bear on the right side of the train. Everyone leaned over to look out and I saw it! It was small and standing right next to the tracks. I think I was the only one in our party to see it.

By the time we pulled into the Skagway station, it was nearly dinnertime. Our excursion included a stop at the Liarsville Gold Mine camp, but because of our delays, we decided to skip that portion and head back to the ship for dinner. After dinner, we visited the BBKing Lounge again, then off to bed. 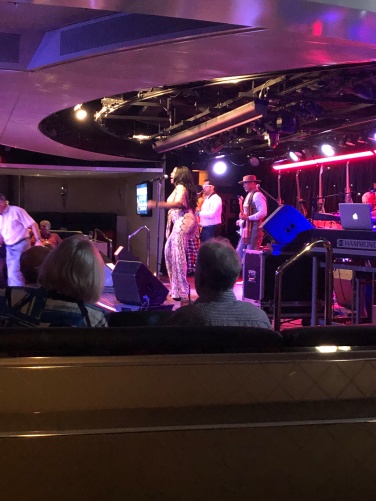 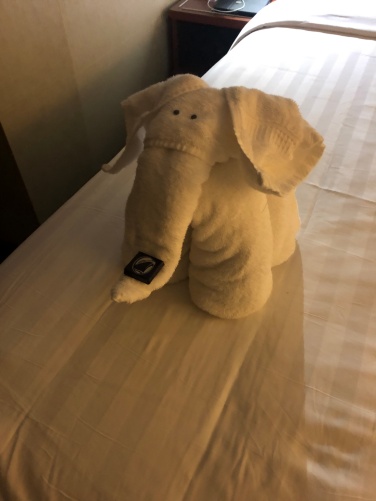 Thursday was cruising Glacier Bay. Talk about amazing views! We spent time in front of Margerie Glacier and saw a couple of calvings. That when chunks of ice break off. We could hear the cracks and pops before the ice fell, as well as the splash when it hit the water. 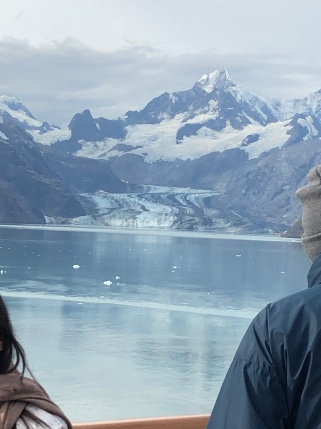 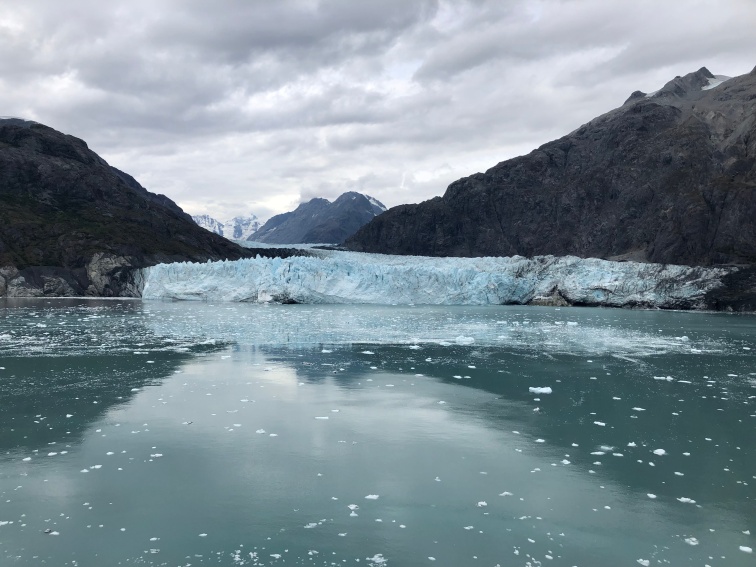 We spent the day relaxing, watching the scenery, and enjoying the peace.

Glacier Bay is a National Park, and several Park Rangers came aboard to give talks and information to passengers. I happened to be reading in one of the empty bars (empty because it wasn’t open yet) and had a great view of when their boat came to pick them up and return them to shore. 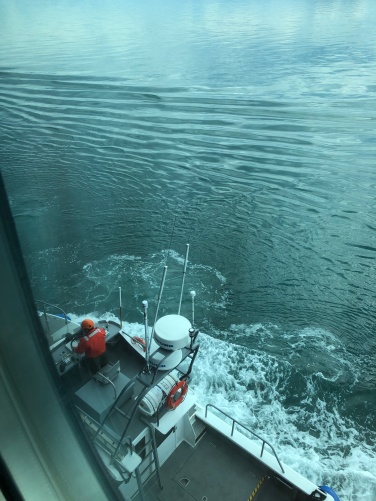 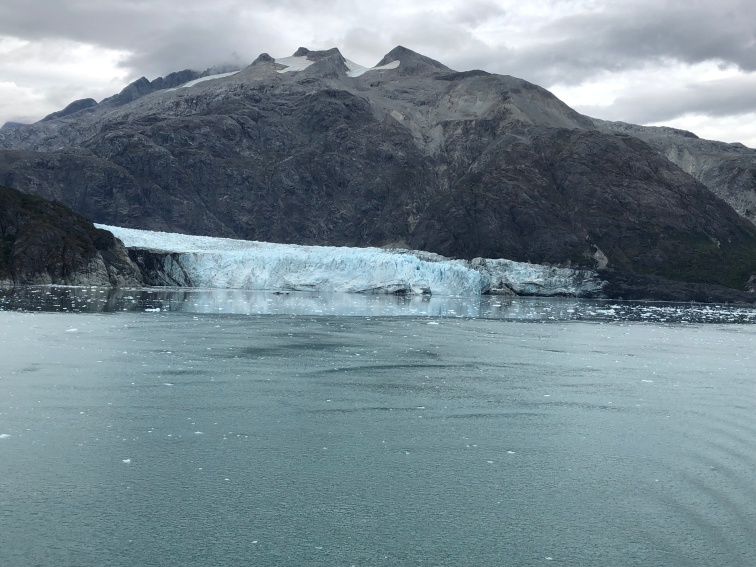 That evening was the second gala evening. We enjoyed lobster for dinner, though I neglected to take a picture.

It was a great day, and one I thoroughly enjoyed!