Another crazy, exhilarating, exhausting day. We left our hotel in Austin, MN and hightailed it to the SPAM museum ASAP as we could. The museum opened at 9 AM and

True confession: I thought we’d be the only ones there, wandering a cavernous building all alone.

David, of course, thought the opposite. We’d be crowded, shoulder to shoulder, shuffled along, already too late to see anything of interest and having to hurry past the exhibits.

Thankfully, the truth was somewhere in between. There were people in the museum, but it wasn’t crowded. And it was more interesting than I expected.

There was lots of history about the Hormel family, how the patriarch started as a butcher and entrepreneur and meat processor and the “empire” started with the Hormel sealed/packaged ham. And then it expanded to the Dinty Moore canned stews, then Jay Hormel wanted to bring chili to the northern states.

SPAM was actually a late comer to the Hormel family (kinda-sorta). 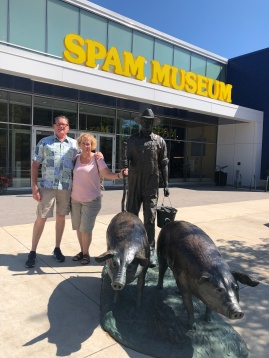 I was really impressed how Hormel is still actively seeking to keep their brand relevant and meaningful.

In the last two weeks we’ve been in Indiana, Illinois, Iowa, and Minnesota. Dave and I have quizzed each other about what’s unusual in each state. What do we see that’s different? What do we not see that we’re used to seeing at home? One of my comments was the ubiquitous array of trash containers for “Trash,” “Plastic Recyclable,” “Glass Recyclable,” and “Paper/Cardboard Recyclable.” I’ve seen signs reminding me to recycle, but there haven’t been a lot of different containers. Except at the SPAM Museum. They had them all!

Dave had been talking to the staff at the Minnesota Farm Fest about when and where we could drop off the trailer for the event there. While we were wandering the SPAM Museum, he got a call. The woman on the other end of the phone, over 100 miles away, told us we had  to go to the Tendermaid Cafe for lunch and get a hamburger. But it’s not a usual hamburger. It’s a loose meat burger.

Well … when someone, two hours away, calls to make a restaurant recommendation, we listen!

The Tendermaid was less than a block from the SPAM Museum and it opened at 11 AM. We arrived a few minutes after opening and scored a couple of seats at the counter. We 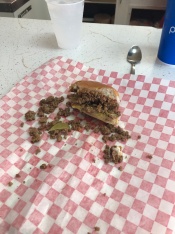 had no clue what we were doing or ordering, but we managed to order a “hamburger,” to share and a malt (which we were also told we “had” to order).

When I had researched food in Iowa, the loose meat sandwich popped up, but I didn’t know it was also a thing in Minnesota.  It’s kind of like a Sloppy Joe, but without the sloppy sauce.

The Tendermaid has been serving loose meat burgers for 81 years. Of course Dave wondered why they didn’t have a SPAM burger (insert rolling eye emoji), but I didn’t. They’ve been in business nearly as long as SPAM has been around. Who knew SPAM was going to be a thing 80 years later? The Tendermaid found their wheelhouse and stuck with it.

The diner is super small. The steamer/cooker is the original (i.e. 81 years old!). 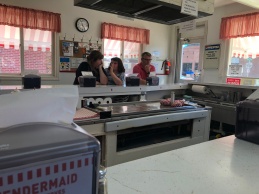 The staff  comes in at about 9 am and start cooking/steaming the meat and breaking it up. We ordered a hamburger. Dave watched when an order for a cheeseburger came in. The waitress/cook scraped together a bunch of meat, laid down a slice of cheese, pulled more meat on top 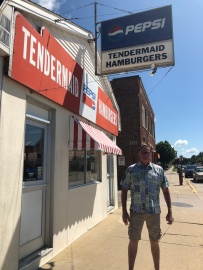 … let it sit a minute, then pulled it all onto a bun.

Made me wish we’d ordered a cheeseburger! Actually, we did. We ordered a Western Bacon Cheeseburger to-go for the guy we were meeting at the Minnesota Farm Fest to drop off the trailer. Someone who called and made the recommendation might have agreed with a question about should we bring a loose meat burger from the Tendermaid. 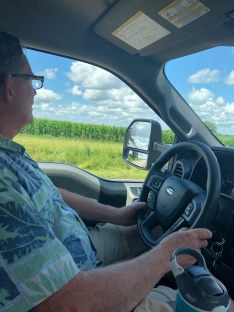 By noon-ish, we were headed to the Farm Fest site to drop off the trailer. And, once again, the winds were in full force. If we could just drive a truck and pull a trailer, everything would be great, but the winds! I can’t post videos on this blog (I’m cheap and haven’t upgraded yet), so check out my Facebook page for the 60 second video I took of Dave wrestling with the steering wheel, wind, and drafting vehicles.

We dropped off the trailer (and a gift of SPAM and a loose meat burger) at the Farm Fest venue and headed to our hotel near the Minneapolis-St.Paul airport. Surprisingly, for two Californians, we’ve actually been to this part of Minnesota before. We both came for the American Christian Fiction Writers conference in 2009 and I came for a deep/intensive/OMWord-I-can’teven-writers-conference a year or two later. But for both of those events, we/I saw: the Minneapolis-St.Paul Airport/The Mall of America/the venue hotel. And, sadly, this visit to Minneapolis doesn’t seem to be shaping up to be much different. We checked into our hotel a little after 6 pm.

Dave cleaned up the truck. We’re across the street from a strip mall, so he asked the front desk staff for a recommendation. He told them we were Californians, so they steered us away from the Mexican restaurant. We went to the “bar and grill.” While we were there, I researched the parking options at the airport. I’d assumed we’d leave the truck at the Long-term parking for our boss to pick up when he got into town in about a week.

That made sense. Until … the regular “Long Term” parking said the clearance is 6 foot …something. Given our experience last week,  we’re not willing to park there. So we (I) went looking for other options. There is another choice for long-term parking, And! they offer a 7′ clearance … but … you have to use the same credit card for entry and exit. Well  … that won’t work since we’re leaving the truck and someone else is picking it up..

We went to front desk and asked if they offered a “Park and Fly” option. They do. With shuttles to and from the airport. For the time we need … $60. The other options at the airport were going to be double that. At least.

We called our boss. He agreed to go with the Park and Fly. So … we’re in our room. We’ve got to get up earlier than we’d expected to get the shuttle to the airport.

We’ll be home around noon tomorrow. Probably stinking. Unshaven (both of us — no judging, okay!?!?).

We have some family and work and medical appointments to take care of the rest of the week. Sunday, we leave for an already planned vacation with friends. We’ll fly out of San Francisco (we think) to Des Moines for the Iowa State Fair (Deep-Fried Butter? More Loose Meat Sandwiches?) on August 8th. After the fair, we’re scheduled to move the trailer to Colorado.