We needed to be in Tacoma by the end of the day, and it’s less than a three-hour drive from Hillsboro, Oregon. Our next event was in Olympia the next day. Since it was our last day in Oregon and our (okay, my) last chance to do some tax-free shopping, I took some time this morning to start my Christmas shopping. I worked for a couple of hours, then Ubered to a shopping center, to Barnes & Noble. By the time I got back, David had done our laundry. A win/win for me!

We had a quick lunch, then checked out, loaded up, and headed north. We stopped for gas again at our casino/gas station and continued on our way. When we made the reservation at Tacoma, since this was our third time at this hotel, we knew the layout. We’d been on the freeway side each time and been bothered by the traffic noise, so I’d emailed and asked for a room away from the freeway. I stressed that we wanted a quiet room.

As we checked in, we reiterated, “Away from the freeway, we want quiet. We need quiet. We’re old. We’re working hard and long days. We need our sleep. Not to mention, we’re half-deaf, so if the traffic is waking us up, it must be really, really loud.”

We were assured our room was quiet and we were being “upgraded” to a suite. That all sounds nice, and the suite was … nice, but it was still on the freeway side. Argh. Of course, this hotel is surrounded by either freeway, an exit ramp, or busy commercial streets. So there’s not a truly “quiet” side, but still, we were specific: away from the freeway.

We had dinner at the hotel restaurant. There was a young girl at a table nearby, with books, coloring books, games, and puzzles spread out. Her father would pop out of the kitchen every so often to check on her. We found out her name is Asia and David struck up a conversation with her. Pretty soon we were playing Tic Tac Toe and Go Fish, to the amusement of the other guests. Asia is quite the young card shark and very good at Tic Tac Toe. I think all of our games except one ended in a tie. (I won that one. 🙂 ) After about fifteen minutes, Asia’s caregiver (she was quick to say she was not Asia’s mother) came and picked her up.

We said goodbye to Asia, thanked her for playing with us and letting us get a pseudo-grandchild visit, then headed back to our suite. 😉 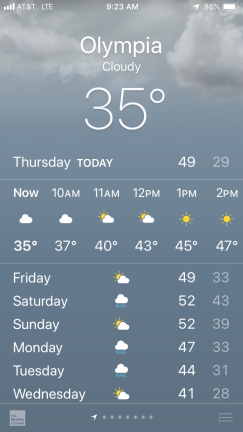 The next morning, we needed to make an early start for our half hour drive to Olympia and the state Capitol. But David took a few minutes to ask the front desk staff what we could do to ensure a quiet room next time. I usually book a room with one king bed. He learned that the rooms away from the freeway are doubles. Although our upgraded suite had two doubles and was on the freeway side. So ?? But anyway, they said book a double and after making the reservation through the app, call the hotel directly and talk to someone. So we’ll try that next time.

We ordered breakfast, but a collegiate girls’ volleyball team beat us to the ordering counter and we ended up having to take ours to go.

We got to Olympia a few minutes late, but found our appointed spot without a problem, and got set up. This time we were able to keep the truck hooked up which helped with staying warm. Because it was really cold. In fact, after we set up, David got an Uber to a nearby Target and bought some hand and foot warmers for us. They helped …

We were a bit off the beaten track at the Capitol, so we didn’t get any legislators come through. The video team and photographers were at a loss and wanted to make sure the company got their moneys worth, so I gave them the tour multiple times so they could get different angled shots of the props and me and/or my hands pointing or holding things.

A couple of PhRMA lobbyists came through whom we had met in Chicago. That was fun! They remembered us and the trailer and were excited to have us in their home state. 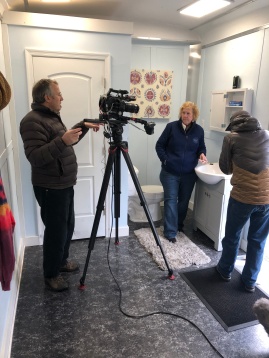 They did send a few coworkers by. And two people came through who are employed by a large pharmaceutical company. They both took the tour, but declined to be on camera, furthering the video team’s dilemma. A member of the state police came through and the video team did get to spend some time with her, giving me a chance to warm up in the truck, walk to the Capitol for the restroom, and pop into the gift shop there for postcards.

We had permission to leave the truck and trailer for a few hours after the event, which was wonderful, because we got to have dinner with longtime friends Kurt and Anna who live in Olympia. They came and picked up us and drove us to dinner.

We went to Anthony’s Hearthfire Grill. Anthony’s is a local chain, and the Hearthfire Grill is on the sound. I’m sure the views are amazing, but we didn’t have the right weather (or daylight) to properly enjoy them. We had their dinner specials, which were delicious! Four courses for a flat price. We had shrimp cocktails and Caesar salads. I had prawns for my main course, and they were fabulous, with enough leftover for another meal. Then “Burnt Cream” (Creme Brulee) for dessert.

We hadn’t seen Kurt and Anna in probably 25 years. Maybe more. We keep in touch with Christmas cards and Facebook, so we picked up like we’d chatted last month. It was so wonderful to catch up and hear about their kids and their lives. That has been one of the biggest blessings of this adventure: the opportunity to visit family and friends across the country that we’d otherwise not be seeing.

After dinner, Kurt and Anna drove us back to the trailer and truck. We said goodbye and hopes that we don’t go another 25 years (yikes! We’d be reallllly old by then!), and headed back to Tacoma and our freeway-side hotel room.

Our event is right in Tacoma, at the Tacoma campus of the University of Washington. We had a bit of a sticky situation getting in position. We were told space numbers in a parking lot, so we pulled into the long and narrow lot only to discover that our spaces were on the street in front of the lot. If we’d known that coming in, that would have helped. At one point, I was in the driver’s seat while David was directing me to turn and back up, until the trailer was situated to where he could pull it out of the lot.

It was another cold day, but we still had hand and foot warmers. Our day was scheduled to be from 9 AM to 4 PM. It was Orientation Day for the next semester’s incoming students. We had a fair amount of foot traffic and did a surprising number of tours, over 30.

The campus is really beautiful, considering it’s essentially in downtown Tacoma. At least I think it is. It’s definitely in urban Tacoma. It’s full of old brick buildings that were once commercially used and many of them still have their old, original names on them.

David walked to a nearby restaurant and brought back hot dogs from Hot Rod Dog for lunch for us and Ana, our local consultant. They were good, with a very crisp snap to them.

By about 3:15 we were frozen and Ana said we were done. Foot traffic had dwindled. So we loaded up. But of course … earlier, two teachers had come by. They were very interested in a tour, but were on their way to a meeting. They said they’d be back. So just as we were almost all loaded up, they arrived. David gave them a brief tour with some highlights, while Ana and I finished the outside tear down. Then we walked around and huddled near the generator, trying to stay warm. Once the final final tour of 2019 was done, we finished loading up, said goodbye to Ana, and headed back to our hotel, all of 15 minutes away, which was a lovely change of pace.

At the hotel, we had our leftovers from Anthony’s Hearthfire in Olympia, enjoyed a brief soak in the hotel spa, and began packing, ready for an early departure tomorrow. 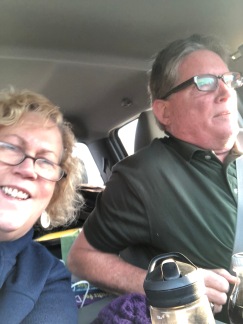 We are headed home! Our first stop is Yreka tonight. We want to get there in time for dinner at the Mexican restaurant we ate at the first time we came through, coming home from the Alaska cruise with my folks, Casa Ramos.

We have an uneventful day, and have a delicious dinner. We Facetime with Taryn’s family and get a good night’s sleep.

Home is the goal today! It’s a beautiful clear, crisp morning in Yreka.

We skip church in favor of hitting the road and getting by 4 PM. Friends Lee and Karie bring over dinner, a delicious stew and rolls.

It’s been a long five and half months. A lot has happened. We’ve learned a lot about ourselves, and each other. About our country. About traveling. About people.

In the next few weeks, I plan to share some of the lessons we learned.

The trailer received funding for another year. We’ve been offered our jobs again and we’ve accepted. We’re tentatively planning to leave around January 15, 2020. I’ll keep you posted about that, too.

Thank you so much for reading! I know these last posts have been looooong. I’ll try to stay more current in 2020.